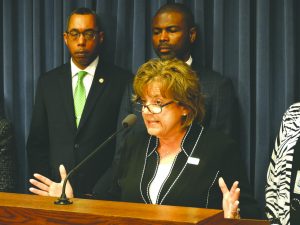 Barbara Wilson, executive vice president of the University of Illinois system, speaks about the impact additional funding cuts to higher education could have on the state’s largest university during a news conference with Reps. Nicolas Smith (rear left) and LaShawn Ford, the vice chair and chairman of the House higher education budget committee. (Capitol News Illinois photo by Peter Hancock)

SPRINGFIELD — Democrats in the Illinois House, along with officials from each of the state’s public universities, warned May 1 that unless the state finds new sources of revenue, there likely will have to be funding cuts to higher education in the upcoming budget year.

“For years, our universities have been unfairly treated as their state has decreased funding to the universities,” Rep. LaShawn Ford, a Chicago Democrat and chairman of the House higher education budget committee, said during a Statehouse news conference. “Last year’s funding level is not adequate enough, and as we go through the budget, we learn that the revenue to meet (the fiscal year 2019) level is not there.”

Ford said state funding for higher education peaked in 2002 around $2.4 billion. For the current budget year, the state is expected to spend only about $1.8 billion, roughly 25% less than it spent 17 years ago.

Ford was joined in the news conference by officials from each of the state’s public universities, as well as other members of the higher education budget committee.

President Elaine Maimon of Governors State University, which serves a large population of first-generation students, students of color, and military veterans, said colleges and universities were hit especially hard during the two-year budget impasse of 2015 to 2017 because the state was not under any legal or court-mandated obligation to fund higher education.

As a result, she said, during the 2015-2016 budget year, colleges and universities received no appropriations until April 2016, and even then received only about 30% of their normal funding. She said that resulted in significant cuts in university programs and services.

“Our biggest competitor is not an out-of-state university or a community college or a private university in Illinois,” she said. “It is nowhere. If our students don’t have these services, they go nowhere, and just to put it in crass terms, they will not become the affluent taxpayers that will support the state.”

Barbara Wilson, executive vice president of the University of Illinois system, said further cuts in higher education funding would have a big impact on the state’s largest university.

“Across the U of I system we are educating 52% of the students who go to public institutions in this state,” Wilson said. “So I always say, if you hurt U of I, you’re hurting a big chunk of the students and families in the state.”

In his budget proposal, Democratic Gov. J.B. Pritzker called for a 5%, or $52.2 million, increase in state funding for public colleges and universities. He also proposed increases in various kinds of state-funded student financial aid.

But Pritzker’s budget plan hinges on lawmakers approving a number of new taxes and revenue streams, including licensing fees for the sale and production of legalized marijuana, and new revenues from legalized sports betting, both of which could have a direct impact on college and university campuses.

“What I do know is that the University of Illinois and their think tank is providing a study of various revenue options,” Governors State University’s Maimon said in a separate interview after the news conference. “It should be out in the next week or so. We are looking forward to that.”