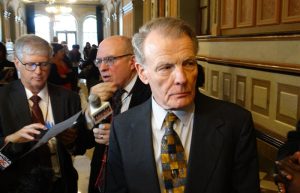 House Speaker Michael Madigan is shown in this file photo from Oct. 28, 2019, at the Capitol in Springfield. Madigan is referred to as “Public Official A” in federal court documents filed last month in which ComEd agreed to pay $200 million to resolve a federal investigation into a “yearslong bribery scheme.” (Capitol News Illinois file photo

SPRINGFIELD — A group of Commonwealth Edison ratepayers asked a federal judge Monday to force the utility company, House Speaker Michael Madigan and others to pay “at least” $450 million to be split among all those affected by an alleged extortion scandal.

The number of affected ratepayers could rise to more than 3.8 million, according to a lawsuit filed by attorneys representing six residents that all resided in the Chicagoland area at some point in the last decade.

In an agreement with the U.S. government to avoid prosecution, ComEd officials in July acknowledged they funneled money through contractors to colleagues and friends of Madigan.

Those “bribes” — which total more than $1.3 million according to a federal lawsuit filed Monday, Aug. 10 —  were made from 2011 through 2019 in an attempt to influence the longtime House gatekeeper to pass legislation favorable to the utility and kill other bills that would negatively impact the company.

That “racketeering scheme” generated more than $150 million in profits for ComEd, according to the document — all of which is money paid by customers in service charge hikes and fees implemented by laws for which ComEd and its parent company, Exelon Corporation, lobbied in support.

ComEd distributes electricity to 70 percent of Illinoisans, according to the lawsuit, making the company the largest utility in the state.

Exelon, ComEd, Madigan and various other officials participated in an operation designed to enrich themselves while defrauding consumers, the lawsuit alleges. That would be a violation of the Racketeer Influenced and Corrupt Organization Act, used by the federal government to prosecute and dismantle organized crime groups.

If a judge in the Eastern Division of Illinois’ Northern District agrees, ComEd ratepayers could be compensated the $150 million the utility earned in profit “threefold” as well as attorneys’ fees.

The Illinoisans who filed the case also requested a judge bar Madigan from being involved in any way with legislation affecting electricity in the state. They also want a judge to force him to resign as chairman of the Democratic Party of Illinois “in order to prevent him from continuing to run the state party in a corrupt manner.” He has held that position since 1998.

A spokesperson for the speaker did not respond to a request for comment.

One of the laws named in the court document was the Energy Infrastructure and Modernization Act, passed in 2011. It changed how utility companies could raise rates.

Previously, ComEd would have to present proposed electricity delivery fees to the Illinois Commerce Commission, which would then conduct “hearings comparable to judicial proceedings in which ComEd had to prove both the reasonableness and justness of its proposed rates,” according to a court document. This system was used for almost a century.

Once the act became law, utility companies could “avoid” that process and use a formula dictated by statute “that spits out automatic rates annually,” according to the filing. This authority expires at the end of 2022 unless the General Assembly renews it before then.

Due to the change, electricity rates ComEd charges customers jumped by 35 percent over the past nine years, the group argued in their lawsuit.

Those costs increased another 4 percent with the implementation of zero emission credit fees. ComEd and Exelon lobbied for the passage of the Future Energy Jobs Act in 2016, which included the charge, because it provided “massive subsidies” to the two nuclear power plants it owns in the Quad Cities and Clinton.

The lawsuit alleges that in exchange for his help passing those legislative measures, Madigan wanted “ghost-payroll jobs” for his allies. At least 15 such associates were paid by ComEd through other contractors for jobs for which they did little to no work.

These payments “were also intended to influence and reward Madigan in connection with the advancement and passage of legislation favorable to ComEd in the Illinois General Assembly,” according to a court document, and were funneled through other companies “in part to assist ComEd in denying responsibility for employment oversight of Madigan’s associates.”