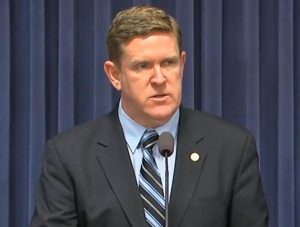 State statute dictates that “no person may acquire or possess any firearm, stun gun, or taser,” or ammunition, without having a state-issued FOID card. ISP has 30 days from the date it receives an application and filing fee to either approve or deny that request. For renewals, state police officials have 60 days.

The Firearms Services Bureau, in charge of processing those applications, “often” misses those deadlines, according to the lawsuit. Residents are left “in limbo for months,” argue the State Rifle Association, based in Chatsworth, and Second Amendment Foundation.

The Foundation, based in Bellevue, Washington, has Illinois members.

Court documents misidentified the bureau chief of that ISP office — it is Maj. Jarod Ingebritsen, a spokesperson said, not Jessica Trame. The lawsuit was also filed against State Police Director Brendan Kelly.

“The consequences for delay are neither abstract nor a mere inconvenience; they are a matter of life and death,” the groups alleged. “Sadly, in similar situations, where the government bureaucracy legislatively empowered to act as a Second Amendment gatekeeper has dithered in processing applications, there have been fatal results.”

The only example cited in the lawsuit is a 2015 case in which a New Jersey resident was killed by her ex-significant other before her gun permit application was processed.

Members of the two groups, as well as four Illinois residents — from Chicago Heights, Oak Forest and Buffalo Grove — did not receive notice from the State Police about whether their applications were approved or denied within the 30-day timeframe mandated by statute, according to the court document.

It does not specify when the applications were filed or how long those Illinoisans have waited for ISP action, but does mention a June CBS Chicago story in which a spokesperson said an influx of new applications was delaying processing.

“With an explosion of applications and firearms purchases during the pandemic and current events — 63,823 FOID applications … just last month — broader legislative remedies to streamline and modernize the FOID process will be necessary to meet statutory timelines,” a spokesperson said in an email. “We look forward to working with all interested parties and members of the General Assembly to reach those solutions. The Firearms Services Bureau is committed to resolving the issues and meeting our public safety mission.”

The spokesperson added that the number of FOID card applications filed in June is up 148 percent from June 2019 when 23,359 applications were submitted to the State Police.

In the lawsuit, the groups argue the delay is also caused by “the State of Illinois’ persistent refusal to provide the resources necessary.”

Almost $30 million allocated to the State Police for conducting background checks and responding to FOID card applications was transferred to other state accounts, according to a 2019 Government Forecasting and Accountability report.

“The Illinois State Police agree FOID applications should be processed quickly and within the statutory guidelines,” the ISP spokesperson said in an email. “Financial instability brought on by the lack of a budget in the prior administration greatly impacted the processing of FOID applications by the Firearms Services Bureau.”

She added that “at least” 32 added analysts and investments in technology allowed under this fiscal year’s budget will help address the issue.

“Illinois cannot justify completely and indefinitely denying its residents their fundamental Second Amendment right to possess a firearm to defend their lives, families, and homes while they wait for the ISP to approve their FOID card applications,” according to the lawsuit. “Simply put, if the State of Illinois is going to condition the exercise of a fundamental right on the receipt of a license, then the process for issuing that license cannot be defective to the point of near-inoperable.”

The groups are requesting a judge declare that the State Police violated two rights guaranteed by the U.S. Constitution — the Second Amendment right to bear arms and the Fourteenth Amendment right to “an objective, prompt, and appealable procedure.”

ISP’s “challenged practices are now causing and will continue to cause (Illinoisans) to suffer irreparable injury,” according to the court document.

Additionally, the groups are asking a district court federal judge to compel the State Police to “immediately issue FOID cards” to the residents named in the lawsuit and pay monetary damages and attorney’s fees.