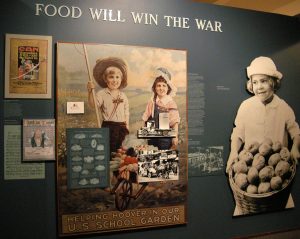 Our nation has a farm crisis, a medical care and supply crisis, a budding economic cataclysm and other horrifying pending disasters that aren’t really on the way to getting fixed.

We complain on social media about the progress of recovery from the coronavirus pandemic, but we are making few demands on a strikingly inert national government. We are relatively passive as the country drifts toward depression and fascism.

This should be our moment as a people. It is passing us by, and so, perhaps, is our ability to preserve our nation in reasonable condition for those who follow us.

We, the baby boomers, are not who we wanted to be. Instead of being the successors to The Greatest Generation, we are merely babies. To a great extent, that also goes for the generation that we produced, and the one after that.

Our generational crisis is a crisis made for the 21st Century. Most of us are forced to stay in our homes, which seems ironic because that’s what each succeeding generation seems to do best.

At home, we do things we might do anyway, only more often. Before, much of what we consumed was delivered, or prepped for our pickup. Now it’s almost everything.

The big difference is that we now have people risking their lives to provide these services to us for the same wages that have always kept them in poverty. And we’re not even giving most of them paid sick leave so they can save themselves if they suspect they’re infected.

Most of us don’t even seem to care that we have a farm crisis,  just as we did 100 years ago. In recent weeks, millions of gallons of milk have been poured into rivers, and millions of pounds of produce have been plowed under. Millions of eggs have been smashed to prevent them from hatching into chickens. Slaughterhouses are closed.

The market for food has shrunk because there are many fewer restaurant meals and no school lunches.

Soon, the farmers will be replanting to try to make up the lost income. And dairy cows have to be milked. So the food dumping probably won’t stop anytime soon.

Meanwhile, many grocery store shelves are sparsely stocked, and the same for the food pantries, even though demand has skyrocketed. Across the planet, there’s hunger. 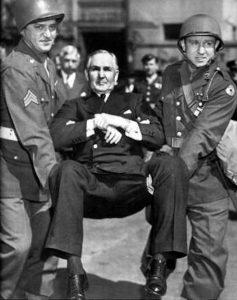 Montgomery Ward boss Sewell Avery was carried out of his office after refusing to cooperate with the U.S. government during a crisis in 1944. (Smithsonian Institution)

We fail to imagine how the great old generations of the past might handle the fix we’re in. We have their old road maps. But we don’t read them, maybe because we don’t know how to read a road map anymore. Can’t even fold one.

In both World War I and World War II, Americans moved heaven and Earth to provide food for the military and the civilian population. In The Great War, President Woodrow Wilson signed the Food and Fuel Control Act, which gave newly appointed Herbert Hoover of the U.S. Food Administration the powers of a “food czar.” He took over the entire system, moving food at his will and stabilizing farm prices. He was a huge success, and it eventually propelled him to higher office.

Hoover and other Washington leaders let the farms slide after the war, and then he seemed paralyzed when, as president, the Depression struck. Oddly, considering his history, he refused to use the government to intervene in the economy. But that’s politics.

It was left to the Franklin D. Roosevelt administration to create the “Alphabet Soup” collection of agencies to temporarily realign American business to save the nation. That included the War Food Administration, which rode herd on the nutritional needs of the military and those at home, including federally funded school lunches, which was a new thing.

After the war the Marshall Plan flew massive amounts of food to a starving Europe.

But today, we’re burying food when millions of people, here and abroad, would like to eat it. Deserve to eat it. This, while we have a military with, comparatively, nothing to do, and a very big fleet of transportation equipment.

Why no Pandemic Food Administration? One would think that our Imperial President would enjoy bringing large segments of the economy under his thumb. Enlisting the National Guard, taking over the railroad and shipping lines, nationalizing the trucking industry. He could have so much fun.

But that’s not happening, and Congress isn’t demanding it. We don’t have credible ultimatums to industries to provide personal protective gear, ventilators, and test kits, either.

We just crawl to the same old corporations begging for a little cooperation.

That’s not the way it used to be.

When Montgomery Ward boss Sewell Avery defied the National War Labor Board and refused to settle a 1944 strike, endangering delivery of essential products, the U.S. Army seized Ward’s 2 million-square-foot Chicago headquarters.  Every serious student of the American World War II home front has seen the picture of two soldiers carrying Avery out of Ward’s on his desk chair.

It’s impossible to imagine such a thing happening today. Now our government pleads and cajoles with captains of industry. There is no machinery to force corporations to do the right thing in crisis, even though, in the past, the right thing was usually vastly profitable.

It’s hands off. Forever, probably. There are all kinds of rules to keep employees in line, but the bosses? Untouchable.

Maybe Carroll O’Connor’s Archie Bunker was right when he sang the theme song of “All in the Family.”

Mister, we could use a man like Herbert Hoover again.