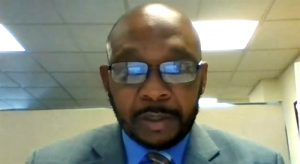 Rep. Will Davis, D-Hazel Crest, speaks in favor of the Path to 100 Act and diversity in the renewable energy field at a virtual news conference Wednesday, Oct. 14. (Blueroomstream.com)

SPRINGFIELD – Lawmakers and renewable energy stakeholders are calling for legislative action on measures meant to bring funding to and diversify the clean energy industry in the state.

Members of a coalition backing the Path to 100 energy legislation legislation made the calls in a virtual news conference Wednesday, Oct. 14. Their legislation aims to raise a rate cap on energy bills from about 2 to 4 percent to provide funding for renewable projects, avoiding what Rep. Will Davis called the “solar cliff.”

“This is a time when Illinois desperately needs jobs, but the renewable industry in Illinois has lost an estimated 3,500 jobs in the last year,” Davis, a Hazel Crest Democrat, said in the news conference. “This is mainly because our state’s renewable energy program is running out of funding. Today, we are calling on the General Assembly to pass the Path to 100 Act to solve this crisis, and we are announcing a new diversity and equity plan that will be a key part of our renewable energy sector going forward.”

The diversity initiatives laid out Oct. 14 include funding workforce development programs for the industry through the Department of Commerce and Economic Opportunity and creating diversity hiring and contracting mandates for companies procuring Renewable Energy Credits through the Illinois Power Agency, among other actions.

The coalition said it also aims to expand access to community solar initiatives and the Solar for All Program for low-income Illinoisans.

The principles are meant to go hand in hand with the Path to 100 legislation, which is included in House Bill 2966 and Senate Bill 1781.

Gov. J.B. Pritzker’s office laid out eight broad principles to guide energy negotiations moving forward, and they include equity advancement measures such as incentivizing renewable energy providers to contract with diverse suppliers through tax credits and exemptions among other efforts.

Energy legislation stalled during last year’s legislative session as stakeholders and lawmakers expected to address the matter in 2020, but COVID-19 and an ongoing bribery scandal involving the state’s largest utility, Commonwealth Edison, halted the talks and the bills were not heard during the abbreviated May legislative session.

But Pritzker’s recommendations tie ethics and transparency initiatives into the energy mix as well in an effort to separate negotiations from the ongoing scandal.

Davis said the measures backed by Path to 100 coalition members fall in line with the governor’s goals.

“This is a step toward comprehensive energy reform that Gov. Pritzker has called for, and we don’t feel it can wait any longer,” Davis said.

“We are committed to making our workforce as diverse as our state and ensuring that all families can take advantage of clean energy savings,” she said. “But these advances won’t happen if our industry goes out of business. Fixing Illinois’ clean energy funding crisis is necessary to sustain and expand renewables in Illinois and continue to make diversity a cornerstone of our next phase of growth.”

The other major energy legislation gathering support in the General Assembly is the Clean Energy Jobs Act, an 894-page legislative proposal that aims to reform the way the state purchases energy capacity and sets a ramp aimed at achieving 100 percent renewable energy usage in the state by 2050.

That measure is more sweeping than Path to 100, and it includes language aimed at electrifying the transportation sector and ensuring a “just transition” for areas that have lost coal plants by creating new jobs in those communities.

In recent weeks, the governor’s administration, legislators and stakeholders have been meeting in working groups to discuss a path forward on energy reforms, and those discussions are ongoing.

The Path to 100 backers believe their bill can stand alone as a way to create funding for renewable projects outside of other major energy reforms. Davis said he is hopeful that a bill can pass in the fall veto session, scheduled for Nov. 17-19 and Dec. 1-3.