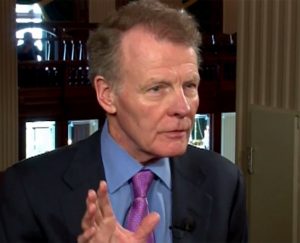 SPRINGFIELD – The chairman of a special committee investigating Democratic State House Speaker Michael Madigan’s role in a bribery scheme involving utility giant Commonwealth Edison has postponed the panel’s next meeting, which had been scheduled for Thursday.

Rep. Emanuel “Chris” Welch, D-Hillside, announced Wednesday that the meeting is being delayed, in part because of the worsening COVID-19 pandemic and in part because it is still waiting to receive documents from ComEd.

“The Committee is currently awaiting documents requested from ComEd, which the company has indicated they are working to provide within the coming weeks,” Welch said in a statement Tuesday. “Both Democrats and Republicans believe these documents will provide critical context to our work. While we face a surge in COVID cases across the state and new mitigation guidelines, holding a hearing without these requested documents would not only be unproductive but also an unnecessary risk for members, staff and our communities at large.”

Welch did not announce a new date for the delayed meeting.

Madigan was implicated in the bribery scheme in July when ComEd officials entered a deferred prosecution agreement in federal court in which they admitted to handing out lobbying jobs and contracts to close associates of Madigan’s over a nine-year period in an effort to curry his favor for state legislation that benefitted the company. Madigan has denied any wrongdoing and has not been charged with a crime.

Republicans in the General Assembly, however, say the allegations spelled out in the deferred prosecution agreement amount to “conduct unbecoming of a legislator,” and they filed a petition in the House in August that initiated the disciplinary proceeding. 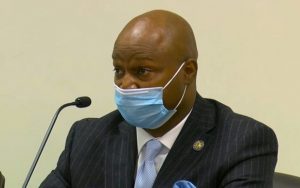 Rep. Emanuel “Chris” Welch chairs a Special Investigating Committee of House Speaker Michael Madigan on Sept. 29 in Springfield. Welch announced Wednesday he was delaying the next meeting of the committee, which had been scheduled for Thursday, Nov. 5 indefinitely. (Blueroomstream.com)

That proceeding begins with the formation of a Special Investigating Committee whose job is to determine whether there is enough evidence to support such a charge. The six-member committee is divided evenly between Democrats and Republicans, but a majority of at least four votes is required to pass any motion.

So far, the committee has met only twice, the last time on Sept. 29. A week later, Welch announced that the committee would not meet again until after the Nov. 3 general election in order to remove the proceedings from “the backdrop of a political campaign.”

In his statement Wednesday, Welch noted that both Republicans and Democrats on the panel wanted to hear testimony from Fidel Marquez, a former ComEd senior vice president of governmental and external affairs, but that he had declined to appear before the committee. Marquez was indicted for his role in the scheme and has pleaded guilty to one count of conspiracy to commit bribery.

Although the state Senate has adopted rules that allow them to hold subject matter hearings remotely, the House has not adopted such a rule, which means their committee meetings, including disciplinary ones, must be conducted in person.

Last week, Region 3 of the state’s reopening plan, which includes Springfield where the Special Investigating Committee meets, was placed under enhanced mitigation measures after the rolling seven-day average COVID-19 test positivity rate rose above 8 percent for three consecutive days. As of Sunday, Nov. 1, the most recent data available, the region’s positivity rate stood at 11.1 percent.

House Minority Leader Jim Durkin, R-Western Springs, who initiated the petition that led to the committee’s formation, had scheduled a virtual news conference for Wednesday afternoon, but that news conference was postponed due to technical difficulties, according to a caucus spokeswoman.

“The duty of the Special Investigating Committee is to conduct an investigation. A petition was filed 66 days ago in accordance with House Rules. The last meeting was 37 days ago, at which time we made a motion to issue subpoenas to key witnesses who have relevant and important information—but the Chairman did not allow a vote on that motion. Members of the House of Representatives—in both parties—should be concerned about the way this process is being handled.”