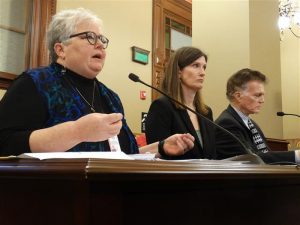 Legislative Inspector General Carol Pope (left) and former LIGs Julie Porter and Tom Homer testifying before the Joint Commission on Ethics and Lobbying Reform on Feb. 6 at the Capitol in Springfield. Pope said the office should have more independence and shouldn’t have to get permission from lawmakers — the very people the LIG is supposed to oversee — to perform her job. (Photo by Peter Hancock/Capitol News Illinois)

SPRINGFIELD — All three people who have held the position of legislative inspector general in Illinois told a joint ethics panel Thursday the office needs more independence to police the General Assembly and maintain the public’s confidence in the process.

Carol Pope, the current officeholder, and former Inspectors General Julie Porter and Tom Homer appeared before the Joint Commission on Ethics and Lobbying Reform, a group that is to make recommendations for governmental ethics reform in the state by the end of March.

Porter, who left the job in February 2019, has been the most outspoken about the need to strengthen the office. In April, she wrote an op-ed piece for the Chicago Tribune calling the system “broken” because it allows a small group of legislators to stifle an investigation or bury a report.

On Thursday at the Statehouse, she echoed that theme, arguing that the process will remain flawed as long as the LIG is answerable to the eight-member group of lawmakers known as the Legislative Ethics Commission That body has authority to deny permission to conduct investigations, issue subpoenas or even publish reports.

“The legislative inspector general cannot be independent, and having a legislative inspector general is a waste of resources, if a Legislative Ethics Commission staffed by legislators — all appointed by the House and Senate leaders — presides over her investigations and has the power to kill them,” Porter said in written testimony submitted to the panel. “That is precisely the system we have now in Illinois: The fox is guarding the henhouse.”

In her op-ed column last April, Porter outlined two cases she had investigated in which she found substantial evidence to support allegations of misconduct by sitting legislators, but because of confidentiality rules she was not allowed to discuss the details.

In the first case, the commission denied her request to publish her report, effectively burying the allegation. The second, she said, was passed on to her successor, Pope, who did not even forward it to the commission.

“It was obvious, I suspect, that the Legislative Ethics Commission would bury it, just like it buried my other report on a similar topic,” Porter said.

Since then, Porter said, she has been made aware of a third case that began during her tenure that she had referred to the attorney general’s office so it could file a complaint with the Legislative Ethics Commission.

Porter noted the inspector general is required to file quarterly reports about its cases. That case was listed as “pending” in the second quarter, but the third quarter report showed it was no longer pending.

Porter said she did not know what happened to the case but that the Legislative Ethics Commission’s own quarterly report for that same period noted the commission “did not agree to publish” another founded summary report.

“Because I am bound to confidentiality, I cannot share with you what this investigation was or detail for you the many hours spent to get to the bottom of what I concluded was serious wrongdoing, warranting a founded summary report and even a formal complaint brought by the attorney general,” Porter said. “But my report and the attorney general’s complaint should not be secret. They remain so only because the Legislative Ethics Commission squashed them so that the public could not see what the supposedly independent inspector general determined to be wrongdoing by a sitting legislator.”

Pope, the current LIG, agreed the office should have more independence and shouldn’t have to get permission from lawmakers — the very people the LIG is supposed to oversee — to perform its job.

Pope said the LIG’s investigations should be confidential until he or she is ready to issue a report. But she said that’s not possible under the current system because in order to launch an investigation or issue subpoenas, the office has to inform the eight members of the Legislative Ethics Commission.

Homer, meanwhile, agreed the powers of the office should be strengthened, but he was less insistent on giving it complete autonomy, especially regarding subpoena power.

“I understand the reason that the Legislature wanted to have checks on the power of the legislative inspector general, but I think it has caused unintended results and suppressed the publication of reports that would allow the public to have more confidence,” he said. “If they don’t see that anything’s being done, the assumption is that there’s nothing being done, and that’s not the case. There needs to be more transparency to the process.”