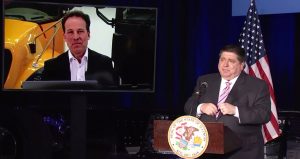 Marc Bedard, CEO and founder of Lion, appears remotely at the press conference where Gov. J.B. Pritzker on Friday, May 7 announced Lion’s plans to build a major electric vehicle plant in Will County. The plant is expected to be in operation by late 2022. (illinois.gov)

Gov. J.B. Pritzker joined Will County elected officials and leaders with the Lion Electric Company on Friday, May 7 to announce plans for the company to build its first-ever U.S. manufacturing facility in southwestern Joliet.

Lion Electric is a Canadian-based manufacturer of all-electric medium and heavy-duty urban vehicles.

A minimum of $70 million will be invested to build a new facility — the largest plant of its kind in the country — dedicated to producing medium and heavy-duty electric vehicles (EVs) in the U.S.

The facility is expected to come online in the second half of 2022, setting into motion annual production capacity of 20,000 zero-emission vehicles a year, and creating at least 745 jobs for Illinoisans.

“Lion’s historic investment to bring its largest production facility to Illinois represents not only a win for our communities, but a strong step forward in our work to expand clean energy alternatives and the jobs they bring to our communities,” said Pritzker. “The new Joliet facility will put Illinois at the forefront of a national movement to transition to zero-emission vehicle use, advancing our own goals of putting one million of these cars on the road by 2030. In Illinois, we know that a clean energy economy is about more than just vehicles – it’s about healthier communities and jobs for those who live there. We are excited to welcome Lion to the Land of Lincoln and look forward to their future success here.”

The new 900,000-square-foot facility represents Lion Electric’s largest dedicated production site in the U.S. The company’s expansion helps respond to increasing demand in the marketplace for “Made in America” zero-emission vehicles, while simultaneously bringing production closer to its customers.

Lion’s investments also help brings Illinois closer to its own clean energy goals, with plans to increase adoption of EV’s in the state to one million by 2030, according to a statement released by the governor’s office.

“Lion is the leader in electric school buses and has always been dedicated to the U.S. market, and our commitment to be close to our customers is one of the core values we have as a company,” said Marc Bedard, CEO and founder of Lion. “This significant expansion into the U.S. market will not only allow us to drastically increase our overall manufacturing capacity of electric trucks and buses but to also better serve our customers, while adding critical clean manufacturing jobs that will form the backbone of the green economy.”

He praised various civic groups “committed to developing a long-term roadmap for the local tech industry, played in connecting Lion with the Chicago area’s business and civic community to help further commercial traction, as well as engagement with key workforce and supplier partners.”

The Illinois Department of Commerce and Economic Opportunity (DCEO) worked with the state’s public-private economic development partner, Intersect Illinois to put together “an exhaustive site selection process” that involved both virtual and in-person site visits, economic analysis, and coordination with local officials and utilities to develop a comprehensive proposal for Lion Electric, the governor’s office stated.

As part of its agreement with the government of Illinois, Lion has committed to initial investment of at least $70 million over a 3-year period. The company is working with local officials to apply for additional local incentives.

“Lion’s decision to bring their first U.S. production facility to Illinois is great news for Illinois residents and a welcome addition to our growing EV manufacturing sector,” said DCEO Acting Director Sylvia Garcia. “Under Governor Pritzker’s leadership, we are making investments today in workforce training and infrastructure that provide global companies like Lion the confidence needed to bring long-term investments and clean energy jobs to our great state. We welcome Lion Electric to Illinois and look forward to working alongside the company and all our local partners to support its continued growth and success in the years to come.”

The Will County region has a rich history of manufacturing, and Lion plans to build a robust local supply chain within the area, Pritzker said. In addition, the Joliet location offers Lion a geographically centralized base of manufacturing and operations, with access to key infrastructure and distribution channels.

“This major investment by Lion Electric Company is great news for Joliet, Will County, and the entire state,” said U.S. Rep, Bill Foster (IL-11). “Not only will this new facility mean several hundreds of new, good-paying manufacturing jobs, but it will be the largest plant in the country building all-electric medium and heavy-duty vehicles. This investment capitalizes on the world-class infrastructure, well trained workforce, and nearby expertise in leading-edge green technology in the southwest suburbs.  As a scientist and businessman, I was proud to work with Governor Pritzker to help recruit Lion Electric to Illinois, and I’m proud that effort has led to an investment that will bring meaningful economic benefits to our community.”