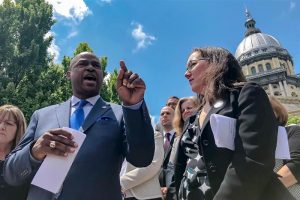 Reps. Emanuel “Chris” Welch of Hillside, who is now House speaker, and Kelly Cassidy of Chicago speak in 2019 at a rally for the Reproductive Health Act. (Capitol News Illinois file photo)

SPRINGFIELD – A leaked draft of an upcoming U.S. Supreme Court decision that could overturn the landmark 1973 case Roe v. Wade reignited a political debate over whether access to abortion is a constitutional right or something that can be regulated by the states.

The draft opinion was first reported Monday night by the news organization Politico. On Tuesday, the court issued a statement confirming it as authentic but denying that it represents a final decision.

An appendix to the 98-page document reveals a brief sliver of the history of abortion laws in the United States, including Illinois, which first banned the procedure outright in 1827. Of the states admitted to the union by 1868, the year the 14th amendment extending civil rights protections to state laws was ratified, Illinois was second only to Missouri in having acted to criminalize abortion, according to the appendix.

That law made it illegal to administer any drug or substance with the intent to cause a person’s death, “or to procure the miscarriage of any woman, then being with child.” The crime was punishable by up to three years in prison and a $1,000 fine. In 1867, Illinois lawmakers expanded the prohibition on abortion “by means of any instrument” and raised the maximum prison sentence to 10 years.

In modern times, however, Illinois has taken a different view on the issue. Changes signed by governors from each party since 2017 have made the procedure widely available and, in some cases, allowed for public funding of abortion.

Abortion prohibitions were common throughout the U.S. until Jan. 22, 1973, when the court, in a 7-2 ruling in Roe v. Wade, declared that access to abortion during the first two trimesters of pregnancy was protected as part of a fundamental right to privacy and that states had only limited authority to regulate the procedure.

For a time after that, Illinois was among a handful of states to enact so-called “trigger laws” that would reinstate the ban on abortion if Roe v. Wade was overturned.

A 1975 “trigger law” remained on the books in Illinois until 2017 when then-Gov. Bruce Rauner, a Republican, signed House Bill 40 to repeal the trigger law and allow abortions to be covered under the state’s medical assistance program and the state employee’s health insurance system.

Prior to that law, Illinois had only covered abortion services in cases of rape or incest, or when there was a threat to the life or health of the mother. The new law, however, extended that to anyone who was covered by the state’s Medicaid program.

But because federal Medicaid rules do not allow public funding of abortion, the services in Illinois are paid for entirely with state funds.

The bill passed the General Assembly on May 10, 2017, but Sen. Don Harmon, D-Oak Park, who is now the Senate president, placed a legislative hold on the bill for about four months.

The delay in sending the bill to Rauner’s desk allowed pressure to build on the governor from both sides of the abortion debate. In the end, though, Rauner, a longtime abortion rights supporter, said he believed abortion was a matter of personal choice and he signed it into law on Sept. 28, 2017.

A year after signing the bill, Rauner was defeated for reelection by Democrat JB Pritzker and Democrats came into the next legislative session with supermajorities in both chambers.

On the final day of the 2019 legislative session, the supermajority approved a vast expansion of abortion rights through a bill known as the Reproductive Health Act, Senate Bill 25.

Among other things, that bill declared that access to reproductive health care, including abortion services, is a “fundamental right” under state law.

At the time of that law’s adoption, many other states were passing more restrictive abortion laws, some of them as part of a concerted effort to get them before the U.S. Supreme Court in hopes of overturning Roe v. Wade.

But state Rep. Kelly Cassidy, D-Chicago, the bill’s chief sponsor in the House, said at a news conference with Pritzker Tuesday that she believes overturning Roe is just the first step in challenging all rights based on a right to privacy.

“Every single right that we have that is based on the right of privacy, the foundation of the Roe decision, is at risk,” she said. “They’ve telegraphed that in the decision, naming decisions on birth control and interracial marriage and marriage equality. They’ve given us their roadmap.”

The last major expansion of abortion rights in Illinois came during last year’s fall veto session when lawmakers passed House Bill 370, repealing the 1995 Parental Notice of Abortion Act. The 1995 law did not require parental consent, only that a doctor’s office notify a parent of the child’s planned abortion 48 hours prior to the procedure.

“I signed the bill because this is about protecting, in particular, the most vulnerable young people. That’s what it’s about,” Pritzker said Tuesday in defending his decision. “It’s not about your child, or my child. It’s about the children who live in homes where they are not safe. It’s about children who are unprotected out there who need refuge and cannot rely upon a parent.”

In the draft opinion that was leaked Monday, Justice Samuel Alito, writing for the majority, said the decision to overturn Roe v. Wade and other subsequent rulings merely returns the question of whether to ban or regulate abortions to the states.

“We now overrule those decisions and return that authority to the people and their elected representatives,” he wrote.

Pritzker, meanwhile, said that while Illinois has strong laws protecting access to abortions, those laws can be repealed by future legislatures.

“If people who are against women’s rights get elected office, if the legislature turns Republican or the governorship turns Republican, we will end up being an anti-choice state,” he said.