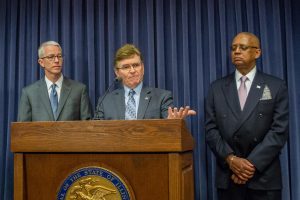 SPRINGFIELD — A local government advocacy group laid out its legislative agenda March 2 and called on lawmakers to fully fund a program that shares state income tax revenue with local municipalities.

The organization’s top priority is for full funding of the Local Government Distributive Fund, or LGDF, which is funded below statutory levels, according to Illinois Municipal League Executive Director Brad Cole.

“City leaders from throughout the state understand the need for shared sacrifice in addressing the state’s budget woes,” Cole said during a Capitol news conference. “However, municipal share of that sacrifice continues to grow and negatively impact the communities that provide for the health, safety and welfare of the residents.”

In two budget scenarios laid out by Gov. J.B. Pritzker last month, the LGDF fund would be funded at either 95 percent or 90 percent of statutory levels for the fiscal year that begins July 1. Which amount is allocated depends on the passage of a constitutional amendment that would allow the state to impose a graduated income tax rate structure.

That’s because Pritzker’s budget leaves $1.4 billion in state spending authority in reserve, including $79 million to the LGDF, if the graduated tax amendment does not gain approval from voters in November. Should it pass, an already-approved graduated rate structure would take effect and make the added spending authority possible, according to Pritzker’s budget team.

“Because this reserve is so large, it inevitably cuts into some of the things that we all hold most dear: increased funding for K-12 education, universities and community colleges, public safety and other key investments. But as important as these investments are, we cannot responsibly spend for these priorities until we know with certainty what the state’s revenue picture will be,” Pritzker said in his budget address last month.

If the amendment passes, the LGDF funding would remain flat from current-year levels at a 5 percent reduction from statutory levels. The budget proposal lays out only Pritzker’s budget priorities, however, and the General Assembly must approve any budget before it can become law.

“Anytime you put on hold funds that are due the municipalities, it creates an issue,” he said, adding the city “would have to prioritize” spending in the event of LGDF cuts, as every 5 percent decrease in funding would cost the city about $650,000.

The group is also backing legislation to reinstate the original statutory requirement of 10 percent of income tax contributions to LGDF. Municipalities receive a prorated portion of 5.8 percent of personal income tax revenues and 6.5 percent of corporate tax revenues, Cole said. 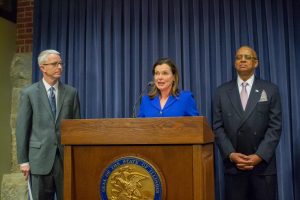 Cathy Adducci, village president of River Forest and vice president of the Illinois Municipal League’s Board of Directors, speaks during a news conference March 2 at the Capitol in Springfield at which the IML laid out its legislative agenda. That local government advocacy organization will lobby lawmakers for full funding of the Local Government Distributive fund, unfunded mandate relief and other initiatives this session. Also pictured are IML Executive Director Brad Cole (left) and Leon Rockingham Jr., mayor of North Chicago. (Photo by Jerry Nowicki/Capitol News Illinois)

The group also announced backing for measures to increase the ability of non-home rule municipalities to levy certain taxes.

They are backing House Bill 5070, which would allow municipalities to impose a local sales tax up to 1 percent via an ordinance, rather than requiring the municipality to put the issue before voters in the form of a referendum.

The group also supports Senate Bill 2978, which would allow non-home rule municipalities outside of Cook County to charge a local motor fuel tax of up to 3 cents per gallon.

IML members also stumped for the elimination of a fee charged for the state’s administration of locally-imposed sales taxes.

“In Illinois, only the Department of Revenue is allowed to collect certain locally imposed sales taxes, and they then distribute them to the local government,” said Cathy Adduci, mayor of suburban River Forest and vice president of IML.

Leon Rockingham Jr., mayor of suburban North Chicago and IML president, said another way to alleviate pressures on local governments is to get rid of “unfunded mandates,” including publishing requirements for a municipality’s annual report.

“State mandates on municipalities are one of the largest drivers of property taxes. With mandate relief, the financial burden to comply with these mandates will lessen and taxpayers will benefit,” he said.

He, along with the group, also urged opening up of the state’s financially distressed cities law to non-home rule municipalities. That program makes cities in both the top 5 percent of aggregate property tax rate and bottom 5 percent in per capita tax yield eligible for state assistance.

Adduci also spoke in favor of a bill, supported by the IML, to remove the liability of municipalities if they fall victim to cyberattacks.

“Municipalities, despite their due diligence, are under threat of becoming the subject of financially unsustainable lawsuits if a cyberattack were to occur,” she said.