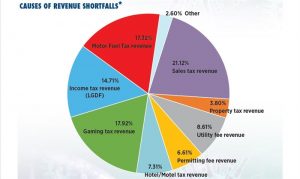 The Illinois Municipal League released a survey of local of governments this week which showed 87 percent anticipate a COVID-19 related revenue shortfall for the period of March 1 through July 24. The median overall revenue shortfall estimated by responding municipalities is 20-30 percent from a year ago. The graphic shows the various causes of anticipated shortfalls. (Courtesy of Illinois Municipal League)

According to a survey conducted by the Illinois Municipal League, almost nine out of 10 city and town governments expect a 20 to 30 percent drop in revenue from March 1 through July 24 as compared to the year before. Just over 225 of the state’s roughly 1,200 municipalities responded to the poll.

Factoring in shortfalls, community officials would be tasked with paying their employees, completing infrastructure improvements, maintaining sewer systems, preserving police and fire fighting forces and offering recreation and senior programs while having access to only 70-80 percent of the revenues initially budgeted for those purposes.

“Those dollars are gone,” Brad Cole, executive director of the Illinois Municipal League, said in an interview. “They’re going to have to cut things that are nice, that people want and many people expect but they might not be able to afford.”

Local governments collect funds through taxes on retail purchases, fuel, gaming, property and income as well as utility and permit fees, for example. But because of economic restrictions implemented by Gov. J.B. Pritzker to curb the spread of the novel coronavirus, many of those sources generated fewer funds than officials expected.

Many shops and businesses deemed nonessential were closed for months, resulting in fewer sales tax dollars. Illinoisans did not travel for work or leisure as they do in typical years, so governments did not collect money from motor fuel or hotel taxes. And state parks and other recreation sites were closed, which generated fewer permit fee collections.

“This is the part where COVID-19 is going to be with us for a while, and it’s at this point where states like Illinois that have refused to maintain any level of fiscal sobriety for decades are caught flat-footed,” Sen. Chapin Rose, a Republican from Mahomet and one of his caucus’s budgeteers, said in an interview. “There’s nowhere to go, nowhere to run and no amount of tax increases possible to cover the losses.”

Government officials who “rush to raise taxes” will not help the economic situation” and “devastate the community,” he said.

Residents would be unable to afford a 30 percent hike in property taxes, Rose cited as an example, to compensate for lost revenues. Any significant increase of that tax would likely result in homeowners listing their houses but being unable to find a buyer. And, if that happened, “people would rightly come unglued,” he said.

“Raising taxes in a recession just makes the recession worse,” the senator said, adding that those Illinoisans who might be able to weather such an increase in costs have already moved out of state.

The economic situation will affect each community differently, but both Cole and Rose said all Illinois government officials will be faced with long-term budget restrictions.

“Illinois communities have been dramatically impacted by the COVID-19 pandemic and without direct financial assistance from both the federal and state government, this will create a ripple effect for years to come,” Cole said in a written statement. “It is imperative that action is taken to address this significant drop in local revenue and provide relief to communities large and small.”