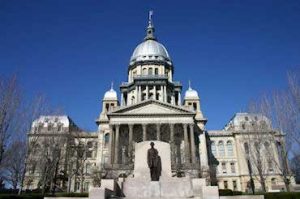 The Illinois Capital Building in Springfield

The Illinois state Senate has proposed a bundle of new taxes to help the state create a balanced budget. New taxes are part of the “grand bargain” budget proposal introduced by Senate leaders John Cullerton (D-Chicago) and Christine Radogno (R- Lemont). The bundle of bills is an all-or-nothing package that ties new revenues and spending with reforms such as term limits and workers compensation changes. The state hopes to raise an additional $6.5 billion from the new taxes.

Here’s a look at the new taxes and how much they’ll affect taxpayers and corporations, and how much cash they’ll generate for the state.

No soda tax after all

The 5 percent individual tax rate was a “temporary” increase when it was introduced by Gov. Pat Quinn in January 2011. The tax increase expired and fell back to 3 percent after the election of Gov. Bruce Rauner, but now “temporary” returns as the new normal. Personal income tax will increase back to 4.99 percent, according to the proposed bill. Individual income tax makes up the largest part of the state’s tax revenue. The new tax income is expected to generate about $4 billion a year. Personal income taxes generate almost half of the total tax revenue collected, according to a November 2016 report by the Fiscal Futures Project of the Institute of Government and Public Affairs at University of Illinois.

“Illinois is a middle-of-the-pack state in terms of [individual income] tax burden,” said David Merriman, University of Illinois-Chicago professor and co-author of the report. Illinois’ flat-rate income tax is written in the Illinois Constitution. Many have suggested changing the state tax rate to a graduated income tax, but it would require a constitutional amendment, Merriman said.

Corporate income taxes will also increase back to 2011 levels, up to 7 percent. But this change won’t generate a significant amount of revenue because the state comparatively does not collect much in corporate taxes, Merriman said. The state collects about $1 in corporate income tax for every $10 collected from individual tax, according to Illinois Comptroller’s Tax Expenditure Reports. Illinois expects to collect $577 million from the corporate tax increase. The Senate bill also closes three corporate “loopholes,” which will generate $145 million. 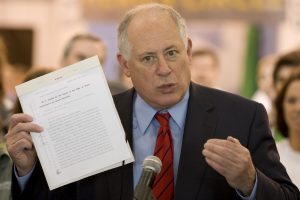 The 5 percent individual tax rate was a “temporary” increase when it was introduced by Gov. Pat Quinn in January 2011. (Photo by Chris Eaves)

A new tax on Illinois for-profit businesses called the “business opportunity tax” will be a five-tier head-count tax on employees of any corporation or partnership business.

“A tax is hereby imposed upon each qualified business for the privilege of doing business in the State,” the bill reads.

The state will generate $750 million annually from these taxes, proponents said.

“As far as we can tell, this tax would impact small businesses with a couple of employees,” said Bobby Otter, budget director for the Center for Tax and Budget Accountability. “We’re a little concerned because small businesses are an important economic engine. If this is going to hit our smaller businesses a little harder than corporations, it stands to be more heavily researched analyzed and questioned,” Otter said.

State sales tax will be collected on some commercial services. Services have become a bigger part of the Illinois economy, said Matthew Notowidigdo, associate professor of Economics at Northwestern University.

“The economy is transitioning more from goods to services, and it seems it’s fair to broaden the sale tax base,” he said.

Service businesses that will be taxable will include landscaping, repairs of personal property (including cars), laundry and dry cleaning, storage companies and a tax on “amusements.” Supporters estimate the tax could generate $413 million.

Other revenue-generating bills in the “grand bargain” package include six new casinos and a one-time borrowing of $7 billion over 10 years to go toward paying down the state’s $10 billion in overdue bills.

Even so, some experts say the revenue proposals under the “grand bargain” budget are not enough to plug the Illinois spending gap of $11 billion to $13 billion. The Fiscal Futures Project report recommends tax increases and a general spending cut of 10 percent. The report also says the state must enact policies that will build the economy and grow the incomes of Illinois residents by five-tenths of a percent per year. Getting the budget back track will take time.

“Our data shows much bigger changes than just these new taxes would be needed. It’s going to take 10 years to get our state back on balance,” said Merriman.