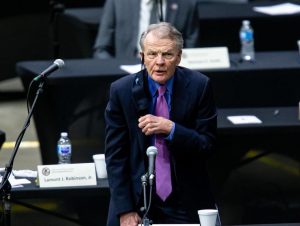 CUTLINE: Rep. Michael Madigan, D-Chicago, casts his vote for Rep. Emanuel “Chris” Welch, D-Hillside, to be House speaker as lawmakers cast their votes for the 102nd General Assembly for the Illinois House of Representatives on Jan. 13, 2021, at the Bank of Springfield Center. (File photo by Justin L. Fowler of The State Journal-Register)

The federal case against former Illinois House Speaker Michael Madigan widened Friday, Oct. 14 after new charges were filed against him and his longtime ally, Michael McClain, alleging they conspired to accept a bribe from AT&T Illinois in exchange for favorable legislation.

Prosecutors also announced that the company had admitted to using interstate commerce to facilitate passage of legislation and entered a deferred prosecution agreement while agreeing to pay a $23 million fine. The company’s former president, Paul La Schiazza, 65, also faces charges for conspiring to influence Madigan.

The latest indictments stem from legislation that AT&T pushed in 2017 known as a “carrier of last resort,” or COLR bill. The charges allege that the phone company paid $22,500 to a Madigan ally in exchange for efforts by Madigan and McClain to pass the bill. The payment was allegedly made through an intermediary to conceal its true purpose.

A spokesman for the Citizens Utility Board, which opposed the bill, said in an email that the law relieves AT&T from its prior duty to offer land line service to any customer within their service territory, once it receives approval from the Federal Communications Commission.

La Schiazza has been charged with one count of conspiracy, one count of corruptly giving something of value to reward a public official, and three counts of using a facility in interstate commerce to promote unlawful activity, including bribery and legislative misconduct, which are violations of state law. Arraignment in federal court in Chicago has not yet been scheduled.

“We hold ourselves and our contractors to the highest ethical standards. We are committed to ensuring that this never happens again,” an AT&T spokesman said in a statement.

Madigan, 80, reigned over the Illinois House for all but two years between 1983 and 2021 and was considered by many to be the state’s most powerful politician. He also chaired the Democratic Party of Illinois from 1998 to 2021 but resigned that position amid the corruption scandal as well.

But he lost his leadership role in 2021 after he was implicated in a bribery scheme involving electric utility giant Commonwealth Edison. He was eventually indicted earlier this year on multiple corruption charges related to that scheme and is still awaiting trial.

The latest charges come less than four weeks before the 2022 midterm elections in which the entire General Assembly and all statewide elected officials are on the ballot.

Democrats hold supermajorities in both chambers of the legislature, but Republicans have campaigned hard on the theme that those majorities are the result of Madigan’s corrupt leadership, both in the House and in the party.

The Illinois Republican Party responded quickly to the new charges by issuing a statement.