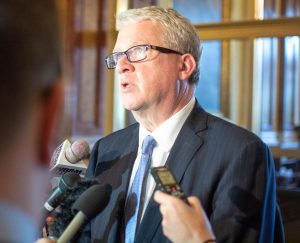 SPRINGFIELD — As the state government attempts to close a multi-billion-dollar budget hole, Democratic House Speaker Michael Madigan has said he is prepared to vote for an increase to the state’s flat income tax rate should the governor request it — a proposal met with pushback from his Republican counterpart, House Minority Leader Jim Durkin.

The $3.9 billion budget shortfall, projected by the state budget office, that lawmakers will confront this spring has gained an increasing sense of urgency with the defeat of the graduated income tax constitutional amendment at the ballot on Nov. 3.

Voters rejected the initiative that would have replaced the state’s flat income tax with a graduated income tax, which was projected to raise revenues by more than $3 billion annually.

The state budget office has projected budget deficits ranging from $4.8 billion in 2022 and $4.2 billion by fiscal year 2026, according to a report last month from the Governor’s Office of Management and Budget.

That report attributed the sizable budget deficit largely to the economic impact of the coronavirus pandemic that has forced many businesses to shut down and led to skyrocketing levels of unemployment.

Madigan’s comments, reported by the Chicago Sun-Times, came during a speaker candidate forum of the Illinois Legislative Black Caucus on Saturday.

Madigan, 78, has served as speaker of the Illinois House of Representatives every year since 1983, with the exception of 1995 to 1997, making his tenure the longest of any state House speaker in U.S. history.

In making his pitch to House Black caucus members, Madigan said he will provide strong leadership that might be necessary if Gov. J.B. Pritzker asks the Illinois General Assembly to address the budget shortfall by raising the state income tax rate — a scenario Madigan described as “very possible,” according to the Sun-Times’ report, which was based on a recording of the closed candidate forum.

“I’m prepared to vote for that, presuming it’s the governor’s request,” said Madigan, D-Chicago, according to the Sun-Times.

Pritzker dodged a question at his daily briefing on Monday about Madigan’s statement that he would support a tax hike endorsed by Pritzker.

On Tuesday, Durkin, of Western Springs, called on Pritzker to release the spending cuts his administration requested from each agency leader last September. Pritzker made that request in an effort to reduce the state’s bill backlog, which was roughly $7.3 billion, as of June 30, 2019. The bill backlog had reached about $7.6 billion as of Tuesday.

The September 2019 request by Pritzker’s administration asked each Cabinet director to submit budget proposals that would reflect a 6.5 percent spending cut.

This September, Pritzker warned state agency directors to prepare for a 5 percent budget reduction this year, and a possible 10 percent cut in fiscal year 2022, which begins July 1.

When asked about whether Durkin has drafted his own proposed list of agency spending cuts, a spokesperson for Durkin said he has asked “repeatedly to begin by looking at this list of agency cuts.”

In his letter to Pritzker on Tuesday, Dec. 8 Durkin said he asked the governor to release the agencies’ budgets reflecting a 6.5 percent cut when they spoke by phone last month.

“As of today, I have not received that document, and I am now asking again for the list of spending reductions by agency,” Durkin wrote. “Speaker Madigan has stated he will work with you on another tax increase, but I hope you will respect the will of the voters and instead look to live within our means.”