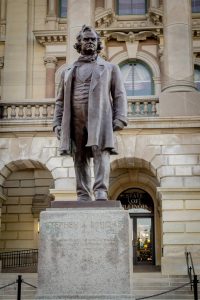 A statue of Stephen Douglas sits directly behind one of his political rival Abraham Lincoln at the Illinois Statehouse. House Speaker Michael Madigan on Thursday called for a removal of Douglas’ image from the Capitol grounds. (Photo by Jerry Nowicki/Capitol News Illinois)

SPRINGFIELD — Illinois House Speaker Michael Madigan on Thursday, July 9 called for removing statues and portraits of the 19th century U.S. Senator Stephen A Douglas from the Statehouse along with other known slaveholders.

“While reading Sidney Blumenthal’s book ‘All the Powers of Earth’ concerning the pre-Civil War period a few months ago, I learned of Stephen Douglas’ disturbing past as a Mississippi slave owner and his abhorrent words toward people of color,” the Chicago Democrat said in a statement. “I advised my staff to research and confirm the history to support removing the Douglas portrait from the House chamber.”

Douglas was a prominent Democratic politician in Illinois during the 1840s and 1850s. He served briefly as secretary of state and, later, as associate justice of the Illinois Supreme Court before he was elected to the U.S. House in 1842. The General Assembly elected him to the United States Senate in 1847 and he served there until 1861, just as the Civil War was beginning.

While in the Senate, Douglas helped write the Kansas-Nebraska Act of 1854, which allowed the territories of Kansas and Nebraska to decide by popular vote whether to enter the union as free or slave states. That effectively overturned the Missouri Compromise, which banned the extension of slavery into new territories, and it led to violent tensions along the Kansas-Missouri border, setting the stage for the Civil War.

In 1858, Douglas was up for re-election, but Abraham Lincoln of the newly formed Republican Party challenged him in the election by the General Assembly. The issue of whether or not to expand slavery to the new territories of the U.S. was the subject of a series of high-profile debates, known as the Lincoln-Douglas Debates, with Douglas arguing that it should be a matter of popular sovereignty and Lincoln arguing against the expansion of slavery.

Douglas’ tolerance for slavery has long been known, but the fact that he actually owned slaves in another state was not widely known before the publication of Blumenthal’s book last year.

Madigan said he plans to offer a resolution to replace Douglas’ portrait in the House chamber and replace it with one of former President Barack Obama, calling that “a more fitting representation of the modern-day Democratic Party.” In the meantime, he said he is looking into ways to cover the portrait immediately.

He also called on the Office of the Architect of the Capitol, which supervises all repairs and alterations to buildings in the Capitol Complex, to move swiftly to remove statues of Douglas and Pierre Menard, a slave owner and the state’s first lieutenant governor, while relocating a statue of Martin Luther King Jr. to a more prominent location.

He said that office should also conduct a review of all statues, portraits and symbols on the Capitol grounds in order to identify and remove any “inappropriate” fixtures.

Madigan’s call for removing images of Douglas from the Statehouse comes amid nationwide protests over racial inequality and calls for the removal of statues and monuments that honor slaveholders and the Confederacy.

“Memorializing people and a time that allowed slavery and fostered bigotry and oppression has no place in the Illinois House, where the work of all Illinoisans is conducted,” Madigan said. “We can only move forward in creating a more just world when these symbols of hate are removed from our everyday lives.”