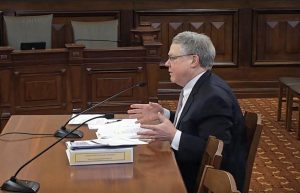 Eric Zarnikow, executive director of the Illinois Student Assistance Commission, testifies before a Senate appropriations committee Feb. 27 in Springfield during a budget request for the commission. He broke down the diminishing purchase power of state aid for low-income students. (BlueRoomStream.com)

Eric Zarnikow, executive director of the Illinois Student Assistance Commission, spent much of his testimony before a Senate appropriations committee breaking down the state’s Monetary Award Program grants, which apply to tuition and fees. The grants are available to eligible Illinois residents who demonstrate financial need and attend approved Illinois colleges, and they do not need to be repaid.

“MAP really does meet today’s low-income Illinois students where they are and it gets aid to the people that need it the most,” Zarnikow said, later noting that MAP recipients graduate at about the same rate as other students enrolled at the same university.

This year, 54 percent of MAP recipients have no parent who graduated college, and 53 percent come from families that are judged by the federal government as having no money to contribute to the cost of higher education.

That program received a $50 million increase for the current fiscal year, which ends June 30, bringing its total state allotment up to $451 million. In his budget proposal for next fiscal year, Gov. JB Pritzker proposed an additional $50 million to the program. The second-straight increase is part of an effort by Pritzker to increase MAP funding by 50 percent over a four-year span.

Zarnikow called the proposed funding spike a “critical investment” in the program, which is often the only avenue for low-income students to attend college, but added it is still not fully funded.

In 2001, Zarnikow said, ISAC had enough MAP funding to serve everybody who was eligible for the program.

“We think it’s pretty amazing that low-income students are able to go to college and make it through college,” he said after outlining the diminished funding.

The $50 million funding increase has helped, he said, as it is estimated that by the time Fiscal Year 2020 ends on June 30, the state will have served about 10,000 more students than it did the previous year. The average MAP grant allotment per student will have increased by about $260 as well.

Still, this will have left about 50,000 MAP-eligible students cut off from funding, Zarnikow said, although only about half that number would have been expected to accept the funding.

Ballooning college education costs are one reason the state has “seen an erosion of purchasing power over time,” Zarnikow said.

In 2002, according to an ISAC presentation, it cost a low-income Illinois resident $13,246 on average for all costs associated with one year at a public university in the state. About $8,718 of that could be covered by MAP grants and federal Pell grants, while $2,625 could be covered through federal student loans. That left the unmet need for students at $1,902 on average.

But while projected total costs for 2020 have more than doubled to $29,280 for one year at a public university, the available MAP and Pell grant share is now at only $11,535, meaning it grew by less than 30 percent in that same span. Now, an average student has access to $5,500 in federal loans and an unmet need of more than $12,000.

Pritzker’s proposed budget also calls for 15 percent of MAP funding — or $75 million total — to be set aside for community colleges, which Zarnikow said should be enough to cover tuition and fees for all eligible community college students when combined with available federal grants.

Zarnikow also informed legislators that a federal grant program providing for the administration costs of ISAC is being phased out, creating a need for greater state funding.

The Federal Family Education Loan Program paid the entire cost of agency operations from 2006 to 2014, but funding from the program has decreased by 65 percent since that time and will eventually stop entirely.

Zarnikow said over that span, ISAC decreased employee head count by 60 percent by outsourcing some tasks and automating MAP grant processing. The employee pool shrunk from 513 to 177 currently, but that number is about as low as it can go, he said.

Projected FY 2021 revenues from the program are $12 million, but ISAC said the funding source is unpredictable and could even be cut entirely.

The total budget request includes $4 million for ISAC operations and $5 million for outreach, research and training activities from the state’s general revenue fund. Those are increases of 14 percent and 43 percent in state spending from a year ago, but that money is making up for FFEP funds that have diminished, not funding new administrative or outreach programs.

The budget ask also includes $35 million for the AIM High program, which provides assistance toward a full-time undergraduate student’s cost of attendance at one of the state’s 12 public universities.

The total requested appropriation for ISAC from the general revenue fund, including all grant programs, is $576.4 million.

Zarnikow also touched on College Illinois, a state-run college savings program which has an unfunded liability he estimated as $317 million.

Pritzker’s proposed budget dedicates $27 million to funding the program’s backlog, a number that if met for 14 years would retire the liability and could save the state $100 million, according to ISAC. That money would be allotted only if a graduated income tax constitutional amendment passes in November, according to Pritzker’s plan.

Zarnikow said the state has a moral obligation to fund the savings program for those already enrolled, but ISAC would prefer not to enroll new participants in it, and has not done so since 2017. Should new funding not materialize, however, enrolling new participants would have to be considered as an option to fund current liabilities, he said.

The appropriations committee did not take action on the funding request, which is subject to change as budget negotiations progress.