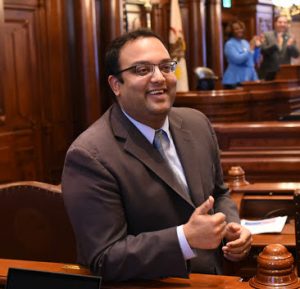 SPRINGFIELD – The Illinois Senate on Friday, May 21 passed and sent to the House a proposed constitutional amendment that would establish a fundamental right of employees to unionize and engage in collective bargaining.

Sen. Ram Villivalam, D-Chicago, lead sponsor of the measure in the Senate, said the amendment is a response to the relatively stagnant wages most workers have seen since the 1970s when union membership nationally began to decline.

“The falling rate of unionization has lowered wages, not only because some workers no longer received the higher union wage, but also because there is less pressure on nonunion employers to raise wages,” he said. “The ability of unions to set labor standards has declined.”

The proposed amendment would add a section to the Illinois Constitution’s Bill of Rights stating, “Employees shall have the fundamental right to organize and to bargain collectively through representatives of their own choosing for the purpose of negotiating wages, hours, and working conditions, and to protect their economic welfare and safety at work.”

It would go on to say that no laws could be passed that diminish workers’ rights to organize, including any state law or local ordinance “that prohibits the execution or application of agreements between employers and labor organizations that represent employees requiring membership in an organization as a condition of employment.”

That is a reference to so-called “right-to-work” laws that began proliferating in the post-World War II era that prohibit any agreements requiring union membership as a condition of employment.

Currently, 28 states have some form of right-to-work laws or constitutional amendments on the books, according to the National Right to Work Legal Defense Foundation, including the neighboring states of Indiana, Kentucky, Iowa and Wisconsin.

In 2015, the village of Lincolnshire attempted to pass a local right-to-work ordinance, but that was later struck down by a federal court, which said that only state governments could enact such laws. Two years later, the General Assembly passed a union-backed bill to prevent local governments from establishing right-to-work zones, but it was vetoed by then-Gov. Bruce Rauner, a Republican, and an attempt to override that veto fell one vote short in the House.

In 2019, however, lawmakers passed another such bill and it was signed into law by Democratic Gov. J.B. Pritzker.

The measure — Senate Joint Resolution Constitutional Amendment 11 — passed the Senate by a vote of 49-7, with 11 Republicans joining Democrats in supporting it. It now goes to the House where it will need a three-fifths majority, or 71 votes, to pass. If it does, it would then be up to Illinois voters to approve during the November 2022 general election.