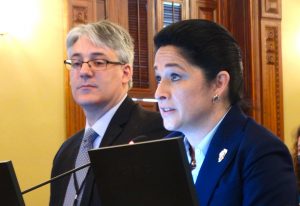 Comptroller Susana Mendoza and Rep. Michael Halpin, D-Rock Island, testify Thursday, March 10 before a House committee in favor of a bill that would require automatic payments into the state’s budget stabilization fund, which was depleted during the two-year budget impasse from 2015 to 2017. (Capitol News Illinois photo by Peter Hancock)

SPRINGFIELD – Illinois Comptroller Susana Mendoza is pushing legislation that would require the state to make automatic deposits into its so-called “rainy day fund” whenever certain financial conditions are met.

Officially known as the Budget Stabilization Fund, it was created in 2001 as a reserve so the state could pay its bills in a timely manner, especially during regular months of the year when revenues are lower than other months. The goal was to maintain a reserve fund equal to 5 percent of the state’s annual revenues.

Current law, however, requires deposits into the fund only when the state’s general revenue estimates increase by 4 percent or more over the prior year, something Mendoza said has not happened since the fund was created.

Instead, transfers into the fund have been made only when the General Assembly makes a one-time appropriation in the budget.

In 2002, lawmakers committed $225 million to the fund with money from the state’s share of a national tobacco lawsuit settlement. Another one-time deposit of $50 million was made in 2004, Mendoza said.

The fund balance then remained unchanged until it was depleted in 2017 during the two-year budget impasse under former Republican Gov. Bruce Rauner.

“Ironically, the prior administration was emptying Illinois’ rainy day fund at the very time that the greatest bull market in our lifetimes was allowing other states to replenish their rainy day funds,” Mendoza told the House Revenue and Finance Committee on Thursday.

“Now fast forward to when the world was hit by the catastrophic COVID-19 pandemic. Our state’s rainy day fund stood at just $60,000 and our backlog of bills stood at around $6 billion,” she said. “Now, $60,000 is not enough to cover even 30 seconds worth of state government operations.”

House Bill 4118, filed by Rep. Michael Halpin, D-Rock Island, would change the funding formula, starting in June 2023, to require automatic payments of $200 million at the end of a fiscal year or however much is needed to reach a 5 percent balance, whenever the state’s backlog of bills payable at the end of the year falls below $3 billion.

It would also require transferring another $200 million into the Pension Stabilization Fund, but those payments would be spread out in equal monthly installments.

The Pension Stabilization Fund, Mendoza said, was established in 2000 as a way the state could make additional contributions into its pension funds, above the statutorily required amount. But no money has been deposited into it since it was created.

The bill also would allow for the transfer of money out of the rainy day fund back into the general fund whenever the bill backlog rises above $4 billion, to enable the comptroller to address outstanding vouchers.

As of Thursday, according to the comptroller’s website, the state’s backlog of bills stood at just over $4.4 billion, but it was as low as $3.1 billion as recently as Feb. 1.

According to the most recent revenue estimates released Tuesday, March 8 from the Commission on Government Forecasting and Accountability, the state’s General Revenue Fund is expected to take in $48.5 billion in the current fiscal year, which ends June 30.

That’s a $4.1 billion increase over earlier estimates that lawmakers used when they passed this year’s budget, meaning the state will likely end the year with a substantial surplus.

“Because we have this improved fiscal condition, I think it’s necessary that we harness that momentum and try to use the moment to prop up our reserves for the future,” Halpin said during the hearing.

Mendoza said keeping a healthy balance in the rainy day fund would help ensure the state is able to pay its bills on time. That’s because revenues do not flow into state coffers at the same rate each month even though bills come due on a daily basis.

That’s important to many state contractors, including small social service agencies that administer programs for youths, families, the elderly and disabled.

Andrea Durbin, executive director of the Illinois Collaboration on Youth, which represents more than 100 community-based providers of children’s services, said payment delays during the budget impasse and in other difficult times have taken a toll on those organizations.

“Payment delays such as these are unfair and harmful to community-based organizations, tying up their capital, forcing them to take out costly loans and lines of credit, and preventing them from pursuing new opportunities or innovations,” she said. “All of the time and energy that boards and executives spend figuring out how to manage their unwilling role as banker to the state of Illinois is time that they are not investing in building capacity meeting needs and helping families and communities to thrive.”

The committee took no action on the bill but lawmakers could incorporate something similar to it as part of the overall budget package they are expected to vote on in April.