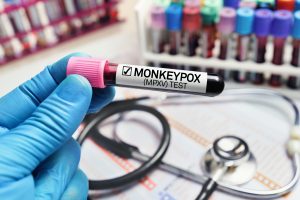 Individuals in “high case burden areas” may contact their local health department about receiving the monkeypox vaccine, but the U.S. Centers for Disease Control and Prevention does not recommend widespread vaccination against monkeypox at this time.

The governor’s office said the proclamation will aid in moving vaccines to the most impacted communities and will allow the Illinois Department of Public Health to expand vaccine and testing capacities with the help of the Illinois Emergency Management Agency and state and federal funds.

The World Health Organization declared monkeypox a Public Health Emergency of International Concern two weeks ago, and Illinois has reported 520 cases thus far, according to the governor’s office. The disease, believed to spread through close contact, can cause a variety of symptoms, the most visible being a painful or itchy rash.

With 85 percent of the cases in Chicago as of last week, the city had received 18,707 vaccine doses while the state had received 7,371, sending 4,631 of them to Chicago. Another 13,000 additional state doses are expected from the federal government “in the near future,” according to the governor’s office.

Last week, IDPH warned in a news release that vaccine demand was “outstripping supplies.” The department advised local public health officials that “unless people are in certain elevated risk categories, they should receive only an initial dose of the MPV vaccine until more supplies become available.”

While the vaccine received by Illinois, manufactured by JYNNEOS, is directed to be received in two doses at least 28 days apart, the IDPH directive will likely mean that the second dose is not received on that timetable.

According to IDPH, individuals in “high case burden areas” may contact their local health department about receiving the vaccine, but the U.S. Centers for Disease Control and Prevention does not recommend widespread vaccination against monkeypox at this time.

The vaccine may be recommended to people who have been exposed to the virus or in close contact with someone testing positive for monkeypox.

According to the CDC, monkeypox symptoms can include headache, fever, respiratory symptoms, muscle aches, chills and exhaustion. But the most visible symptom is a rash that may be located on the face, mouth, hands, feet, chest, genitals or other areas. Most people who contract monkeypox will get the rash, which can look like pimples or blisters and may be painful or itchy. The rash goes through several stages, including scabs, before healing, per the CDC.

The disease spreads through close, personal contact, such as skin-to-skin contact, direct contact with the monkeypox rash or through the bodily fluids of an infected person, according to the CDC. It can also be spread by touching objects, fabrics and surfaces that have been used by someone with monkeypox.

The CDC also states the disease can spread through sexual contact, hugging, kissing, massages and through touching fabrics or objects during sex that have not been disinfected after use by someone with monkeypox.

It can also spread from contact with infected animals or meat.

A person with monkeypox can spread it to others from the time symptoms start until the rash has fully healed, and the illness typically lasts 2-4 weeks, according to the CDC.

IDPH urged anyone who develops a rash to avoid close contact with others and see a medical professional.

Pritzker described the virus as “rare but potentially serious.”

“We have seen this virus disproportionately impact the LGBTQ+ community in its initial spread. Here in Illinois we will ensure our LGBTQ+ community has the resources they need to stay safe while ensuring members are not stigmatized as they access critical health care,” he said in a news release.

The proclamation will be in place for 30 days, although the courts have ruled in response to lawsuits challenging the governor’s COVID-19 orders that the Illinois Emergency Management Act gives the governor authority to extend proclamations as needed.

The governor’s disaster declaration for COVID-19, first issued in March 2020, remains in effect as well.