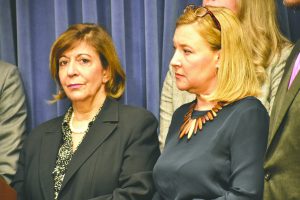 Rep. Sara Feigenholtz (left), a Chicago Democrat, and Rep. Anna Moeller (D-Elgin) participate in a news conference Tuesday in Springfield about the newly formed DCFS Child Welfare Reform Caucus and its focus to improve and reform the state’s Department of Children and Family Services. The news conference was held the same day the auditor general’s office released a 152-page DCFS performance audit report that included 13 recommendations for the agency. (Photo by Lindsey Salvatelli/Capitol News Illinois)

SPRINGFIELD – Sara Feigenholtz said there’s a need to “modernize and improve” the state’s Department of Children and Family Services.

The Democratic state representative from Chicago spoke Tuesday about a new DCFS Child Welfare Reform Caucus that intends to promote legislation during the last month of the 2019 session. She said she hopes that is done through a “bicameral effort.”

During a news conference at the Capitol, Feigenholtz referenced Senate Bill 193, which came out of the Senate last month with language that children served by DCFS would receive services until age 21 instead of 19.

Feigenholtz is now proposing to add new language that would address “vertical accountability” in the agency.

“I want to make sure there are other sets of eyes in these cases that are so difficult,” Feigenholtz said.

The bill would require an internal review of a randomly selected 5 percent of cases and involving children 5 and younger.

Cases involving young children have been under scrutiny with the recent death of A.J. Freund, 5, of Crystal Lake, whose body was found in a shallow grave and whose parents allegedly were drug users.  DCFS had contact with AJ’s family dating back to 2012.

Also, in February, police arrested Twanka Davis in connection to the death of her daughter Ta’Naja Barnes ,2, who froze to death in Decatur. Barnes had been placed in foster care in 2018 while her mother was investigated for child abuse.

“We’re seeing a pattern that these are the children that are falling victim to this,” Feigenholtz said.

Moeller talked of her own experience, being exposed to opiates in utero, then being removed by the state from her mother and placed into the care of her grandparents.

He said he was born to a mother who was addicted to drugs and alcohol before he was adopted by a civil rights attorney. He said reforming DCFS will take time, and he hopes it results in greater access to services that can help families remain together in safe environments.

“I didn’t have to ripped from the hands of my biological mother due to her struggle, due to her drug addiction,” Peters said.