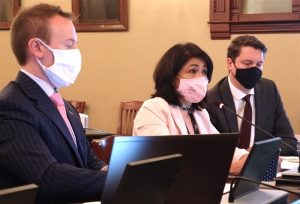 SPRINGFIELD – Illinois lawmakers passed measures Friday, May 28 to redraw state legislative and judicial district lines, less than 24 hours after the bills implementing the maps were introduced.

The latest versions of the legislative maps were released about 6:30 p.m. Thursday, May 27. The actual legislation to implement them was released in the early hours of Friday morning, according to lawmakers. Those bills were then heard in the House and Senate Redistricting committees during 9:30 a.m. hearings that were announced with about one hour’s notice.

Those revised House and Senate maps are similar to a draft set of maps that were released late last week and were the subject of joint committee hearings Tuesday and Wednesday. During the Tuesday hearing, the maps drew wide criticism from racial, ethnic and religious communities, particularly in the Chicago area, who complained that they broke up communities of interest and diluted minority voting power.

In a press release Friday night, Democrats said they took those comments into consideration, along with concerns of some Republicans.

“After 50 public hearings across the state and listening to hours of testimony, the House and Senate Democrats have put together a product our state can be proud of,” Rep. Elizabeth Hernandez, chair of the House Redistricting Committee, said in the release. “What should stand out about this proposed map is how similar districts look compared to our current map.”

Those changes included keeping more of the Chicago-area Orthodox Jewish community in a single district and keeping the North Lawndale neighborhood, a predominantly Black community, in one district.

The revised maps also reconfigure some Republican districts to reduce the number of districts that would have multiple GOP incumbents.

But those changes did not appear to satisfy many of the concerns that were raised about the earlier proposal, including one that called for a district made up largely of Middle Eastern and Arab American residents.

During that hearing, chairwoman Rep. Elizabeth Hernandez, D-Cicero, acknowledged for the first time that the Census Bureau’s American Community Survey was the only data source for population estimates that were used in the mapmaking process, but that voting data from previous elections had been used to determine the partisan tilt of each district. 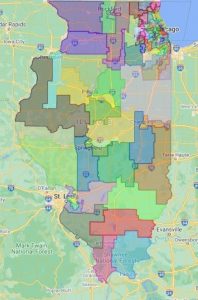 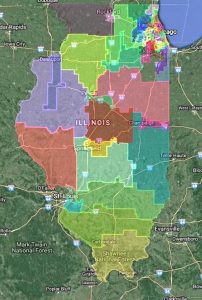 She had previously said that was just one of several data sources for population estimates.

“Why didn’t you tell us that before,” Rep. Tom Demmer, R-Dixon, asked Hernandez.

“Because I didn’t know until now,” Hernandez said. “I too was not aware of what other information (was used) until just recently.”

“I think the committee is surprised by that,” Demmer responded, “and I think the people of Illinois would be surprised to hear that the sponsor of a bill had no decision-making input or knowledge of data being used until last night for what was a months long process.”

Republicans also were harshly critical of how the latest redistricting proposal was released and the short notice members of the public had to offer public comment at the hearings.

“The people of Illinois woke up this morning to the same way that things have been doing business around here for far too long,” Rep. Tim Butler, R-Springfield, said during the hearing. “Again, under the cover of darkness, without any advance notice, legislative maps get dropped, changed.”

Hernandez, however, said the initial draft of a map had been publicly available for a week, and she noted that House and Senate Democrats had set up websites through which the public could submit comments or their own proposals.

During floor debate, Senate President Don Harmon, D-Oak Park, said the redistricting bill, House Bill 2777, was the result of 50 public hearings that had been held around the state.

“A week ago we unveiled the proposed map, and took public comments and testimony,” he said. “We had several hearings during the week. The amendment today reflects some modest changes to that first proposed map that’s been out in public for a week. And with those changes, I believe now is the time for us to do our constitutional duty to follow the Constitution and for the General Assembly to adopt a legislative map before our June 30 deadline.”

But Sen. Sue Rezin, R-Morris, said the process by which the proposed maps were developed demonstrated the need for handing over the redistricting process to an independent commission.

The bill passed the Senate on a party-line vote of 41-18. A few hours later it came up in the House where the debate became even more partisan and acrimonious before it passed 71-45 on partisan lines just before 10 p.m.

“The most important thing to me was that we would avoid this very moment on the floor,” said Rep. Ryan Spain, R-Peoria. “And that’s why year after year after year, I stood as the sponsor for amending the constitution of the state of Illinois, so that we could deliver independent redistricting reform so that we would never again put ourselves in this situation where we’re dividing people and creating maps based on partisan identity.”

Democrats countered that Republicans had other reasons for wanting an independent redistricting commission.

“Let’s not hide behind issues saying we want fair maps,” said Rep. Jay Hoffman, D-Swansea. “Let’s talk about what it really is. What it really is, is you (Republicans) wanting to take back control of the Illinois House of Representatives and the Illinois Senate.”