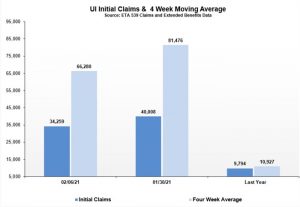 The graphic shows the number of new unemployment claims for the last two weeks compared to the four-week moving average and the numbers from a year ago. (Illinois Department of Employment Security)

The Illinois Department of Employment Security said Thursday, Feb. 11 that 34,259 Illinois workers filed first-time unemployment claims during the week that ended Saturday, Feb. 6. That was down from 40,008 the previous week, but a 250 percent increase over the number recorded during the same week a year ago.

In addition, according to the U.S. Department of Labor, 6,038 Illinoisans filed first-time claims for Pandemic Unemployment Assistance, a federally-funded program that provides benefits to independent contractors, self-employed individuals and others not covered by traditional employment. That was a 46 percent decline from the prior week.

During the week that ended Jan. 30, there were 298,615 people receiving continuing unemployment benefits, down 4.7 percent from the prior week.

The federal agency also reported that during the week ending Jan. 23, another 158,051 people in Illinois filed claims for Pandemic Emergency Unemployment Compensation, another federally-funded program that provides extended benefits to people who have exhausted their state benefits. That was down 6.3 percent from the prior week.

Nationally, the U.S. Department of Labor reported a seasonally-adjusted 793,000 first-time claims for regular unemployment last week, down about 19,000, or 2.4 percent from the prior week.

With unemployment continuing to run at historically high levels in Illinois and throughout the country, Gov. J.B. Pritzker announced Thursday, Feb. 11 that enrollment in the Affordable Care Act health insurance marketplace will reopen on Monday, Feb. 15, and remain open through May 15.

The Affordable Care Act, also known as Obamacare, offers subsidized health insurance plans for people who do not have access to affordable health coverage through their employer and who do not qualify for Medicaid.

Enrollment is typically open only during October and November for the following year, but President Joe Biden signed an executive order opening a special enrollment period in response to the COVID-19 pandemic in states that participate in the federal marketplace.

During the special enrollment period, people already enrolled in an ACA plan will also be allowed to change their plan.

In Illinois, the marketplace is known as Get Covered Illinois. People interested in signing up or changing their coverage can visit www.getcoveredillinois.gov.

“We know families in Illinois are still hurting from the impact of COVID-19, whether they’re suffering from unemployment or caring for loved ones with the disease,” Illinois Department of Insurance Acting Director Dana Popish Severinghaus said in a news release. “If you’ve lost your job-based health coverage or are uninsured for any reason, this is your opportunity to enroll in an ACA Marketplace health plan. You will not need to provide documentation of a qualifying life event which is typically required during a special enrollment period.”