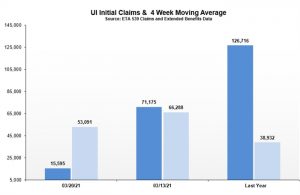 The chart shows the number of new unemployment claims compared to on one week ago and one year ago. (Illinois Department of Employment Security)

SPRINGFIELD – First-time unemployment claims fell sharply last week as both the state and national economies have begun gradually reopening from the COVID-19 pandemic.

The Illinois Department of Employment Security said Thursday, March 25 that 15,595 Illinois workers filed initial claims for regular unemployment benefits during the week that ended March 20. And while that number would normally be considered high, it was down 78 percent from the week before. It was down 88 percent from the same week a year ago, at the start of the pandemic, when more than 126,000 people filed first-time claims.

That decline was in line with a national trend. The U.S. Department of Labor reported that the total number of initial claims nationally fell by more than 42,000, to 241,745.

IDES also announced March 25 that the state’s preliminary unemployment rate dropped three-tenths of a point in February to a seasonally adjusted 7.4 percent as the economy added 21,100 nonfarm jobs. Those numbers reflect activity for the week of Feb. 12.

“IDES and the Pritzker administration remain committed to supporting claimants and families with the services they need as the state moves toward a full reopening and the economy begins to recover from the COVID-19 pandemic,” Deputy Gov. Dan Hynes said in a statement. “IDES continues to serve an unprecedented number of claimants while working on process improvements that make navigating unemployment and job-seeking services as easy as possible.”

The biggest job gains in February were in the leisure and hospitality industry, which added 32,300 jobs. That sector was among the hardest hit during the pandemic because of restrictions placed on bars and restaurants, hotels, airlines and the cancellation of many conventions. Compared to a year earlier, the sector was still down by more than 185,000 jobs.

According to the U.S. Department of Labor, in the week that ended March 13, there just over 225,000 Illinois workers receiving continuing unemployment benefits, a 7.6 percent decrease from the prior week.

The agency also reported that 4,993 Illinois workers filed initial claims last week for Pandemic Unemployment Insurance, the federally-funded program for gig workers, independent contractors and others who don’t qualify for regular unemployment. That was down by more than 16,000, or 76 percent, from the prior week.