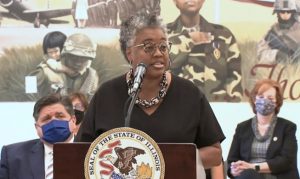 House Bill 2621 aims to create incentives for building and maintaining affordable housing projects through investment of federal funds and tax credits. Pritzker signed the bill at the Hope Manor II affordable apartment complex in the Englewood neighborhood on the South Side of Chicago.

Nancy Hughes Moyer, the CEO and president of Volunteers of America Illinois which developed and owns Hope Manor II, said the facility is an example of “affordable supportive housing at its best.” The campus-style facility is specifically designed for head-of-household veterans and their families

The Englewood community has seen its population decline from just less than 100,000 in the 1960s and 1970s to less than 30,000 today. The Hope Manor development and the area around it aims to bring people back to the community with “high quality affordable housing,” Moyer said.

“Affordable housing is a very, very powerful tool in creating and advancing community revitalization,” she said. “It brings people and density, and often replaces vacant land and abandoned properties with vibrant positive developments and activity. And what is least understood about the potential of affordable housing, is that it can be a very effective pipeline for home ownership, especially in communities struggling with negative perceptions and a desperate need of population density.”

HB 2621, sponsored by Chicago Democrats Rep. Will Guzzardi and Sen. Mattie Hunter, aims to incentivize further development of housing complexes similar to Hope Manor II. It is expected to fund the development and preservation of up to 3,500 affordable rental homes and apartments by the end of 2024, according to the governor’s office.

The new law directs the Illinois Housing Development Authority to launch a COVID-19 Affordable Housing Program and directs $75 million in federal American Rescue Plan Act dollars to support the construction and rehabilitation of affordable rental housing in areas most impacted by the COVID-19 pandemic. Funds will be directed to projects in “disproportionately impacted areas” based on metrics such as unemployment rate, students on free lunch programs and poverty rates.

The measure also extends through 2026 an affordable housing tax credit that would have expired by the end of the year. That credit is for 50 percent of the value of a qualified donation to affordable housing developments. Donations for the program that began in 2001 have included land, buildings and funding. 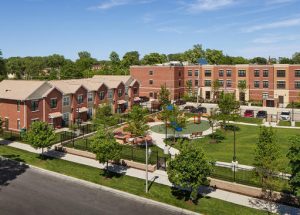 Another provision in the bill directs chief county assessment officers to create special assessment programs to reduce the assessable property value for newly built and rehabilitated affordable housing developments that serve seven or more families. While the program is required in counties with more than 3 million inhabitants, which includes only Cook County, all other counties can opt out by passage of an ordinance.

The General Assembly dedicated more than $252 million to LIHEAP from the American Rescue Plan Act in its current-year operating budget.

The law is also changed to expand eligibility to households earning up to 60 percent of the median income level.

The formula for the fee on utility bills funding the LIHEAP program will change beginning in January 2022. It will be a 48-cent base fee for residences, and will increase by 16 cents each year in which at least 80 percent of LIHEAP funds are spent, capping at 96 cents for residences.

The bill will be 10 times the base amount for non-residential customers using fewer than 10 megawatts of electricity and 4 million therms of gas, and 375 times the base rate for those using above that amount.

The changes in the fee structure are aimed at doubling participation in the Percentage of Income Payment Plan program by 2024. That program allows utility customers to pay a certain amount of their income to a utility bill. The law is also expanded to include customers of smaller utilities.