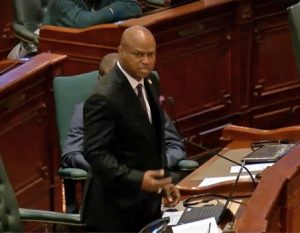 House Speaker Emanuel “Chris” Welch closes debate on the nomination of Michael McCuskey as the next legislative inspector general on the House floor Feb. 17. (Blueroomstream.com)

SPRINGFIELD – Democrats in the Illinois General Assembly this week fast-tracked the approval of their party’s appointee to the watchdog position tasked with investigating lawmaker misconduct.

A harshly partisan debate and near one-party approval for the legislative inspector general nominee, former federal Judge Michael McCuskey, came despite members of both parties offering high praise for the candidate. The appointment passed on partisan lines in the Senate and with support of a handful of Republicans in the House.

The post had been vacant since last month, which led Democrats to push McCuskey’s nomination to the floor this week without approval from a search committee defined in law, according to Senate President Don Harmon’s nomination of McCuskey in the Senate.

At least one case was pending before the vacant office, making the appointment more urgent, according to Harmon and House Speaker Emanuel “Chris” Welch, D-Hillside.

“We’ve learned from past experience that the vacancy in that office should be filled very quickly,” Harmon said on the Senate floor. “The Legislative Ethics Commission has been deadlocked for four months now.”

Republicans speaking against the appointment didn’t specifically cite concerns about McCuskey’s background or character, but rather took issue with the Democratic effort to bypass certain steps in the appointment process.

Each party accused the other of political motivations.

McCuskey was approved as a federal judge unanimously by the Republican-held U.S. Senate upon his nomination by President Bill Clinton in 1998, retiring in 2014. 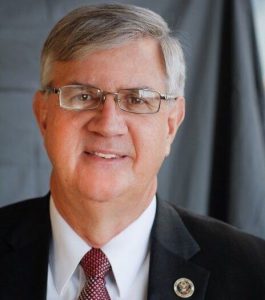 House Minority Leader Jim Durkin, R-Western Springs, joined several other lawmakers in stating he believed McCuskey to be a decent man with great integrity who can “call balls and strikes appropriately.”

Durkin voted present on the appointment, as he and fellow Republicans charged the Democrats with bypassing a non-lawmaker review panel and forwarding the nomination to the floor without approval from the Legislative Ethics Commission.

The four-member search committee, made up of lawmaker-appointed former judges or prosecutors, makes recommendations to the eight-member Legislative Ethics Commission, which is made up evenly of Democrats and Republicans and chaired by Republican Sen. Jil Tracy, of Quincy.

“If we’re just going to say that the statutes, which are the law of the land, are advisory, we don’t have to follow them, I think it’s a poor reflection upon this process. It’s not a reflection on Judge McCuskey,” Durkin said.

Rep. Maurice West, D-Rockford, who sponsored the appointment in the House, said the Legislative Ethics Commission has been at a deadlock for 91 days.

The initial candidates put forth by each party failed to gain the necessary support from the Commission, as did a third candidate, so Democrats brought forth McCuskey after the search panel concluded its business.

The conversation in each chamber became contentious at times, with the GOP saying they would support McCuskey on an “acting” basis while giving a citizen oversight panel time to fully vet the candidate.

The Republican members of the Ethics Commission even said McCuskey was open to serving in the acting role until completing the process in its entirety. That would have been a palatable solution, according to Commission member Rep. Jeff Keicher, R-Sycamore, who said it would have worked as a bridge to the end of the term of the outgoing LIG.

But Democrats didn’t want to approve McCuskey on an interim basis.

Rep. Avery Bourne, R-Morrisonville, who is a candidate for lt. governor, said lawmakers approved the current search process to make the LIG hiring process “beyond reproach.” But she said bypassing the search committee sends a message that the majority gets to choose its own watchdog.

“If we want a truly independent watchdog and to restore the confidence of the people of Illinois and the people in our own body that we can police ourselves, we’ve got to be better than this,” she said. “This isn’t just about process. This is about whether or not you actually want to have a legislative watchdog that’s respected and that can be a watchdog over the General Assembly. And with what you’re doing today, it’s clear that you don’t.”

Welch said Republicans were “playing politics” in trying to delay the vote. “Let’s get down to the important work that we’re all here to do. We’ve got eight weeks ahead of us a lot of work to do in that eight weeks. Let’s stop the games and get some important work done today. Let’s all appoint someone that everyone here today – everyone, everyone that I’ve heard, speak here today – has said is exceptionally qualified.”

In Senate debate Wednesday, Sen. Dave Koehler, a Peoria Democrat, said he could vouch for McCuskey’s character and experience. Koehler said he’s known McCuskey for years and considers him a close friend.

“I will say this as a friend,” he said. “I don’t intend to do this, but if I were to ever go astray and do things that are ethically not consistent with this body, Judge McCuskey would not hesitate but to hold me accountable for that.”

The appointment advanced 37-18 in the Senate with only Democratic support. It passed the House 77-16 with 19 “present” votes.