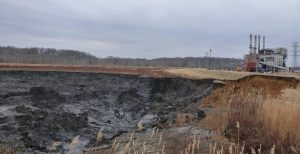 Coal ash, according to the Environmental Protection Agency, is the collection of byproducts of coal-burning power plants, which includes fly ash, bottom ash, boiler slag and various other residues. (Photo courtesy of the Sierra Club)

SPRINGFIELD – After years of work by environmental activists to push action on the issue, the Illinois Pollution Control Board has issued findings and recommendations related to the regulation of coal ash storage — an action advocates call “the first of its kind” in the state.

Coal ash, according to the Environmental Protection Agency, is the collection of byproducts of coal-burning power plants, which includes fly ash, bottom ash, boiler slag and various other residues.

The material, also referred to as coal combustion residual, or CCR, is typically kept in storage ponds located on the grounds near coal-burning power plants, known as surface impoundments.

The impoundments typically contain high amounts of hazardous material, including mercury, cadmium and arsenic, which can pollute and contaminate surrounding bodies of water and drinking water supplies.

While some disposal site operators have taken proper steps to mitigate pollution from the storage ponds, the sites have remained largely unregulated until recently, in some cases lying totally exposed to the elements.

Jennifer Cassel, an attorney with Earthjustice, a nonprofit environmental law group, referred to coal ash regulations as “the ugly stepchildren” of environmental issues, noting lawmakers have long failed to give the issue adequate attention.

“It was sort of excluded from regulation for many years, despite the fact that there was a lot of proof that it was already harming groundwater, polluting groundwater and creating really precarious situations,” Cassel said. 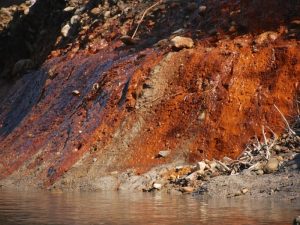 Toxic coal ash waste, the red material in the river bank, from Dynegy’s Vermilion Power Plant in Oakwood leaking into the Vermilion River. (Courtesy of the Prairie Rivers Network)

Cassel said the issue first came to prominence following the 2008 failure of a coal ash retention dike at the Kingston Fossil Plant in Harriman, Tenn. The dike’s failure resulted in the release of over 5.4 million cubic yards of coal ash into the environment, causing severe pollution and requiring a lengthy cleanup process.

The incident drew national attention to the issue of coal ash storage, sparking a wave of state and federal action to address the issue.

Andrew Rehn, a water resources engineer with Prairie Rivers Network, said coal ash disposal sites leave a lasting mark on the environment, even long after a coal plant is shut down.

Rehn said that as Illinois reaches a “turning point” in transitioning away from coal, the cleanup and regulation of coal byproducts has again come to the forefront.

“As coal is getting pushed out of the market, and we’re seeing coal plant closures being on the horizon, we’re starting to ask the question of what are we going to do with all this waste product that was pretty poorly handled initially,” Rehn said.

One such example in Illinois is the Vermillion Power Station, a former coal plant owned by Dynegy which closed in 2011. The former plant is located on the Middle Fork of the Vermillion River in east central Illinois, just northwest of Danville.

According to American Rivers, the site still contains over 3.3 million cubic yards of coal ash produced over the 55 years the power plant was in operation, which poses a threat to Illinois’ only designated wild and scenic river.

Cassel said the location is a top area of concern for coal ash cleanup, as pollutants have begun to leach out of the retention ponds and into the river due to improper storage methods, while natural erosion has complicated matters further.

“(The river is) carving its way towards these leaching ash ponds, making them more and more precarious almost every day and it’s a pretty amazing amount of erosion,” Cassel said.

The site is now the subject of two pending lawsuits filed by Earthjustice on behalf of Prairie River Network, one in federal court and one before the Illinois Pollution Control Board. Both lawsuits accuse Dynegy of violating state and federal environmental regulations due to continued leaching of coal ash at the site. 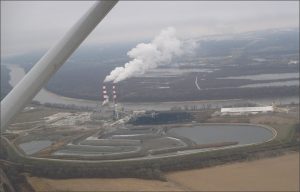 Dynegy is still required to conduct further groundwater monitoring and close the ash ponds in accordance with new rules from the Pollution Control Board and IEPA, Cassel said.

However, the Vermillion Power Station was not the only location found to be in violation of environmental standards.

A 2018 report co-published by the Environmental Integrity Project, Earthjustice, Prairie Rivers Network and the Sierra Club found that 22 out of 24 Illinois coal-fired power plants reported contaminated groundwater due to coal ash runoff and leaching.

Rehn said the groundwater data, which was required to be collected in accordance with regulations from the U.S. EPA passed in 2015, confirmed what each of the environmental groups anticipated and underscored the need to take further action, leading to the passage of the Illinois Coal Ash Pollution Prevention Act of 2019.

In accordance with that 2019 bill, the Pollution Control Board issued new rules and findings on April 15, finalizing the rules by which coal plant owners and operators must abide.

According to a statement issued by the Illinois EPA, the rules “provide for the protection of public health and the environment.”

“These rules, which went through extensive public comment, establish a comprehensive State permitting program to govern all aspects of CCR surface impoundments, including regulation of the location, design, construction, operation, closure and post-closure care, as well as the remediation of releases,” the statement read.

Under the Coal Ash Pollution Prevention Act, owners or operators of coal ash surface impoundments were required to pay initial fees of $50,000 for each closed coal ash plant and $75,000 for those that have not yet been closed. The bill also requires fees of $25,000 annually for each site that has not completed closure, and $15,000 for each closed site which has not completed adequate post-closure care. Those fees go to the state’s environmental protection and inspection fund. 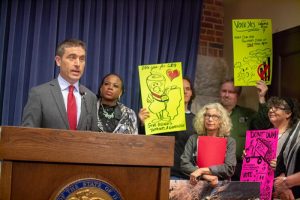 : State Reps. Mike Marron, R-Fithian, and Carol Ammons, D-Urbana, are joined by advocates at a news event May 21, 2019, in Springfield as they speak in favor of Senate Bill 9, which was signed into law the week of July 29, 2019. In April, the Illinois Pollution Control Board issued final rules for coal ash regulation. (Capitol News Illinois file photo by Jerry Nowicki)

Additionally, all coal ash storage sites not owned by a municipality are responsible for providing financial assurance in the form of bonds, a trust fund, or letter of credit ensuring the remediation can be paid for in the event the responsible company runs out of funds or abandons the site.

Under the new rules, a pair of permit processes are established by IEPA to guide proper storage and cleanup efforts.

An operating permit would pertain to active coal ash disposal sites and would require companies to meet obligations for maintenance, dust control and pollution mitigation. A closure construction permit would be issued to coal ash sites which choose to close or that are forced to close due to a violation.

The rules also require the owners or operators of the site to publicly post all permits and documents related to projects and allow for public review and feedback on the storage or cleanup process.

“These rules really give us guidance on how to answer that question on the process that that we have to go through to make sure that the cleanup is done right and also that the public is involved in that process, which I think is a key part of doing the cleanup,” Rehn said.

Cassel agreed, saying the new rules are “a huge step forward” in ensuring adequate protections are in place for coal ash cleanup and closure.

“It was really a priority to make sure that we had safeguards in place, so that when so many of these ash ponds close, they do so in a safe and protective manner that doesn’t leave communities exposed to these heavy metals that are leaching out of coal ash ponds for decades or centuries,” she said.

While Cassel and Rehn said cleanup of sites is expected to continue into next year as a result of the new regulations, environmental advocates are continuing to look at issues related to coal ash, and plan to open a new subdocket of outstanding historic coal ash disposal issues.

Cassel also said the new rules could serve as an example for other states moving forward.

“We’re one of the first states to really take a comprehensive approach at how we deal with coal ash ponds,” Cassel said. “I think the transparency and public participation provisions in particular are ones that could serve as models for other states, and really making sure that communities voices are heard in how to how to best limit the pollution from this stuff.”