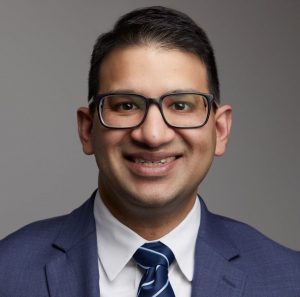 SPRINGFIELD – Illinois will soon have a new Department of Public Health director and its first electric vehicles coordinator after Gov. J.B. Pritzker announced those appointments in recent days.

Until then he will serve in an “acting” capacity.

Vohra is a general pediatrician who holds degrees in law and public policy, with a recent focus on improving health outcomes in central and southern Illinois, according to the governor’s office. He serves as an associate professor of pediatrics at the Southern Illinois University School of Medicine, where he received his medical doctorate.

Vohra said in a news release he was humbled by the announcement.

“Gov. Pritzker, along with the dedicated staff of IDPH, have served our state admirably during the COVID-19 pandemic,” he said. “I am honored to lead this agency into the future, continuing to keep us safe from emerging illnesses, supporting our public health workers, and promoting wellness in every community across Illinois.”
Vohra’s job, which will officially begin Aug. 1, comes with a salary of $185,673. At that time, he will replace Amaal Tokars, an Ezike deputy who has been filling the post since the former director’s departure. She’ll remain an assistant director.

Vohra completed a residency in pediatrics and a Master of Arts in public policy at the University of Chicago, and has a juris doctorate from SIU School of Law, where he graduated first in his class. He completed his undergraduate studies at Northwestern University.

“Dr. Vohra is accomplished in every sense of the word,” Pritzker said in a statement announcing the appointment. “His experience and education transcend sectors and fields, bringing a well-rounded perspective to this agency. As a leader in state and national health policy, I have absolute confidence in Dr. Vohra’s ability to continue shaping a stronger IDPH for the 21st century.”
Pritzker’s announcement of a new IDPH director came as he continued to scale back the scope of his executive orders related to a COVID-19 disaster declaration that has been ongoing in 30-day periods since March 2020.

Unvaccinated workers at skilled nursing facilities, homes for the developmentally disabled and other long-term care facilities will be required to test weekly only when COVID-19 transmission levels are at a moderate level, and twice weekly at substantial or high levels as classified by the U.S. Centers for Disease Control and Prevention.

Testing is not required where transmission levels are low, according to the governor’s order.

The latest executive order does not reissue vaccine mandates for emergency services personnel or higher education employees or students.

Mandates will remain in place at K-12 schools and day cares.

Pritzker’s latest disaster declaration runs through July 24, and he noted in a June 30 interview with Capitol News Illinois he plans to continue to issue the orders while ramping down their scope.

“We have significantly reduced the number of things that fall under our executive orders with regard to COVID,” he said. “In fact, if you look back every month, a little bit less, a little bit less, we’re ramping down things. Some of them are hugely important to keep people safe even now. And we’re not entirely out of the pandemic. So, we want to make sure that we’re helping people as we ramp down the executive orders. Most importantly, what we’ve done has worked, we’ve kept thousands of people alive, who otherwise would have passed away.”

As of July 6, there were 71 counties at medium or high COVID-19 community level in Illinois, a different metric than the “transmission” levels noted in the executive order. Community level takes into account rates of transmission, as well as new COVID-19 hospital admissions and the number of staffed beds available.

Included in the Climate and Equitable Jobs Act energy reform which passed last year was a requirement that the state hire an electric vehicles coordinator within the Illinois Environmental Protection Agency.

On July 1, Megha Lakhchaura was appointed to that role at a salary of $180,000 annually. She’ll lead the state’s push to put 1 million EVs on state roads by 2030 through a number of incentives in state law and the rollout of expanded charging infrastructure.

She previously served since 2018 as the director of policy in North America for EVBox, an electric vehicle supply equipment company based in Amsterdam. Prior to that she was policy director for the rooftop solar and battery storage provider Sunrun Inc., and was a public utilities regulatory analyst for the California Public Utilities Commission.