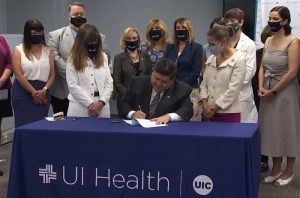 Gov. J.B. Pritzker at a bill signing ceremony on Friday, July 23. The governor has signed 160 pieces of legislation into law from the 102nd General Assembly. (Blueroomstream.com)

Starting Jan. 1, most insurance companies doing business in Illinois will be required to provide their beneficiaries with timely and proximate access to treatment for mental, emotional, nervous or substance abuse disorders.

In addition, insurers will be required to maintain an adequate network of mental health care providers so that beneficiaries in Cook County and the surrounding collar counties will not have to travel more than 30 miles or 30 minutes from their home to see a provider. That limit expands to 60 miles or 60 minutes in other areas of Illinois.

Insurers will also have to make exceptions to out-of-network copay requirements if no in-network providers are available within those time and distance limits.

Those new requirements are contained in Senate Bill 471, which was sponsored by Sen. Laura Fine, D-Glenview, and Rep. Lindsey LaPointe, D-Chicago. The new law applies to health policies that are subject to state regulation, including Medicaid plans. It does not apply to large group health plans that are regulated under the federal Employee Retirement Income Security Act, or ERISA.

“Oftentimes individuals can’t afford to wait days or weeks for mental health or substance use disorder treatment,” Fine said in a statement. “It’s imperative that Illinoisans have easy access to timely and reliable mental health care.”

Also signed into law July 23 was House Bill 212, which calls on the state’s Children’s Mental Health Partnership to develop recommendations for ensuring that all youth in Illinois have access to mental health education and mental health care in a school setting. 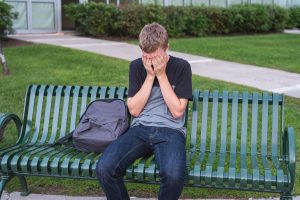 House Bill 212 requires the state’s Children’s Mental Health Partnership to develop recommendations for ensuring that all youth in Illinois have access to mental health education and mental health care in a school setting.

“As our schools recover from numerous pandemic-related challenges, our state must prioritize our students’ well-being,” state Sen. Suzy Glowiak Hilton, D-Western Springs, a chief sponsor of the bill, said in a statement. “To ensure children are receiving the best mental health services at school, this proposal allows key state agencies to work together to improve prevention and treatment resources.”

The Children’s Mental Health Partnership was established in 2003 to advocate for children’s mental health. It is made up of the secretary of human services, the state superintendent of education, and the directors of the Department of Children and Family Services, Healthcare and Family Services, Public Health and Juvenile Justice as well as the head of the Illinois Violence Prevention Authority, the attorney general and representatives of various stakeholder groups.

Pritzker also signed House Bill 33, prohibiting life insurance companies from denying coverage or raising premiums for people solely because they have undergone substance abuse treatment. It also prohibits them from discriminating based on whether an applicant has been prescribed an opioid antagonist drug such as Narcan, also known as Naloxone.

“Overcoming an addiction means putting your future first,” Sen. Adriane Johnson, D-Buffalo Grove, the lead Senate sponsor of the bill, said in a statement. “I’m excited to see insurance companies will no longer be able to punish individuals for changing their lives for the better.”

Meanwhile, another bill signed Friday requires school districts, starting immediately, to provide contact information for the National Suicide Prevention Lifeline and for the Crisis Text Line on the back of student identification cards issued by the school district.

House Bill 597, by Rep. Michael Marron, R-Fithian, and Sen. Scott Bennett, D-Champaign, was an initiative of the Illinois Education Association. It also requires school districts that don’t issue ID cards to their students, or to all of their students, to publish the information on their websites.

Another new law will provide taxpayers with more information about how well tax increment financing districts, or TIFs, are performing. 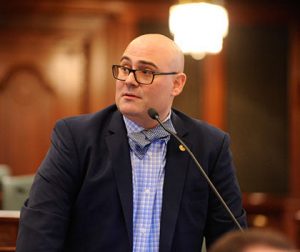 Rep. Jonathan Carroll, D-Northbrook is a sponsor of House Bill 571, which takes a closer look at the effectiveness of TIF districts on local job creation. (Photo courtesy of the Illinois Democratic Caucus)

TIFs are an economic development tool aimed at clearing up blighted areas by allowing local governments to dedicate the new sales tax and property tax revenues generated by a redevelopment project to pay for improvements within the district.

Those can include costs associated with redeveloping substandard, obsolete or vacant buildings, financing public infrastructure, cleaning up polluted areas, improving the viability of downtown business districts, rehabilitating historic properties and providing infrastructure needed to develop a site for new industrial or commercial use.

As of 2015, there were 1,238 active TIF districts in the state, according to TIF Illinois. According to Illinois Comptroller Susana Mendoza, who pushed for the bill, municipalities have been required to report certain financial information about the districts to the comptroller’s office, but there has been little information available about how effective they have been in meeting their goals.

House Bill 571, by Rep. Jonathan Carroll, D-Northbrook, and Sen. Ann Gillespie, D-Arlington Heights, begin reporting additional information including the number of jobs originally projected to be created in each district along with the number of jobs actually created; the actual amount of new revenue created compared to the amount originally forecast; and the stated rate of return for the project, which must be independently verified by a third party chosen by the municipality.

“This is a sensible plan to ensure taxpayers are presented with a more complete picture of whether promises made are promises kept when it comes to TIF districts in their communities,” Mendoza said in a statement about the bill.

Those were among 56 bills Pritzker signed into law Friday. So far, he has signed 160 bills from the 2021 spring session while 505 bills are still awaiting action.

Senate Bill 107, by Sen. Sara Feigenholtz and Rep. Ann Williams, both Chicago Democrats, streamlines adoption processes by allowing state courts in Illinois to exercise jurisdiction in complex adoption cases in which one of more of the birth parents resides out of state. It also removes the residency requirement in cases involving the adoption of an adult by a former stepparent.

House Bill 58, by Didech and Johnson, limits to $10 the fee that county recorders can charge property owners for removing illegal restrictive covenants from recorded property  deeds.

And Senate Bill 605, by Sen. Jacqueline Collins, D-Chicago, and Rep. Barbara Hernandez, D-Aurora, requires schools to develop policies on truancy and chronic absences each year and report them to families, including information on chronic truancy. That law takes effect July 1, 2022.