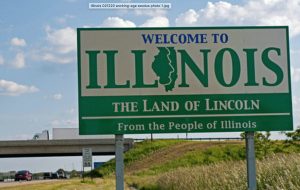 More working-age people are seeing Land of Lincoln signs in their rearview mirror these days, according to federal numbers. Internal Revenue Service figures show that of the 87,882 people Illinois lost to other states in 2019, 58 percent of them were working-age individuals.

Illinois is not just losing population to other states, it’s losing working-age citizens — a key factor for a thriving economy.

Internal Revenue Service data shows that of the 87,882 people Illinois lost to other states in 2019, nearly 60 percent of them were prime working-age individuals between 26 and 54 years of age.

“Unfortunately, that has been the story with the labor force in Illinois for the last decade,” said Orphe Divounguy, chief economist at the Illinois Policy Institute in Chicago. “People looking for opportunity are going elsewhere.”

Divounguy said the perception is that people are leaving the Land of Lincoln for the sunshine states, but that isn’t true.

“The majority of the people leaving are going to neighboring states,” he said.

It is also not a coincidence that the states with the fastest population growth are Texas, Colorado, Nevada and Tennessee, according to Divounguy.

“Those happen to be states with low income tax or no income tax,” Divounguy said, reinforcing the Policy Institute’s stance against the proposed graduated income tax in Illinois.

“The Chicago region is alone among select peer metropolitan areas in losing workers” in both age cohorts, CMAP officials said in an August report about the Chicago area workforce.

CMAP’s analysis of American Community Survey data showed that of peer metropolitan areas, only Los Angeles also saw a decrease in its age 16-24 workers from 2010-17 but the “City of Angels” saw an increase of 20,000 workers age 25-54 during that same time frame.

CMAP’s analysis also indicated that low- and moderate-income residents are leaving the Chicago region, potentially in search on economic opportunity elsewhere. At the same time, the region is gaining high earners, suggesting that the region’s available employment options, quality of life and cost of living may better meet the needs of high earners rather than lower-earning individuals, according to CMAP.

The Policy Institute’s Divounguy said that with technology advances more people can work remotely, even in a different state.

“If you are not constrained by your work location, you are going to go where the cost of living is much lower,” said the chief economist of the independent organization generating public policy solutions aimed at promoting personal freedom and prosperity in Illinois.

“If you are going to buy a house, you want to see appreciation,” Divounguy said. “The Illinois housing market is one of the weakest-performing in the nation. There are still homes that have less value now than before the Great Recession. We have seen housing prices recover in almost every other state.”

He said because of recessed housing values and higher taxes, people in Illinois are paying higher monthly costs than people in other states.

“All the state’s problems contribute to people doing the math and people saying, ‘It’s time to go,’” Divounguy said.

People don’t realize the reasons for tax hikes — bad governance, corruption and unfunded pensions — they just know that their taxes are going up, he added.

Divounguy said economies grow because of people and great ideas.

“If fewer goods are purchased, fewer people are needed to sell those goods,” the economist said. “You need less talent and that affects job seekers. We make it difficult for someone who wants to invest in this state … When your state has the second-worst personal income growth, you are going to lose people.”