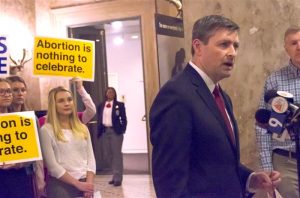 Peter Breen, a former state representative and vice president and senior counsel of the Thomas More Society, speaks during a news event in Chicago after Gov. J.B. Pritzker signed the Reproductive Health Act in 2019. The Society is challenging the legality of an abortion coverage mandate in the law. (Capitol News Illinois file photo by Rebecca Anzel)

SPRINGFIELD – The U.S. Department of Health and Human Services has launched an investigation to determine whether Illinois has violated federal law by enacting and enforcing the 2019 Reproductive Health Act which, among other things, requires certain health insurance plans to cover abortion services.

In a letter dated Jan. 19, which was the last full day of the Trump administration, HHS’s Office of Civil Rights notified the Chicago-based Thomas More Society that it had received a complaint the group filed in October 2019 and had agreed to open an investigation to determine if certain portions of the act violate federal law.

Specifically, the letter stated that HHS’s Office of Civil Rights “is investigating whether the state of Illinois, through its Department of Insurance and Department of Central Management Services, is discriminating against health plan issuers and plans that would offer health coverage that limited or excluded abortion coverage but for the Reproductive Health Act,” Luis Perez, who was a deputy director at HHS in the Trump administration, wrote in the letter.

But it is unclear how the investigation will play out as the department transitions to the leadership of President Joe Biden.

A spokeswoman for Illinois Attorney General Kwame Raoul said in an email statement that his office was aware of the pending investigation but that it intends to defend the state’s law.

“We were notified — on the final day of the Trump administration — of the Department of Health and Human Services Office for Civil Rights’ intention to investigate complaints filed by the Thomas More Society” the spokeswoman said. “In the event that the new administration follows through on this 11th hour attempt to undermine access to reproductive care in Illinois, Attorney General Raoul is committed to defending Illinois’ Reproductive Health Act.”

The Illinois Department of Insurance regulates small-group health plans sold in Illinois while the Department of Central Management Services administers the state employee health insurance program, both of which are under the coverage mandate in the Reproductive Health Act.

The coverage mandate does not apply to private, large-group insurance plans that are regulated under the federal Employee Retirement Income Security Act, also known as ERISA. And while the mandate does apply to plans in the state’s Medicaid program, abortion services within that program are paid for only with state funds, not federal matching funds.

The letter specifically referred to a federal law known as the Weldon Amendment, which has been attached to every HHS appropriations bill since 2005. It prohibits any recipient of HHS funds, including state and local governments, from discriminating against “any institutional or individual health care entity,” including health insurance plans, “on the basis that the health care entity does not provide, pay for, provide coverage of, or refer for abortions.”

“This Illinois law requires health insurance policies to cover elective chemical and surgical abortions,” Thomas More Society attorney Michael McHale said in a news release. “It compels businesses and individuals to pay for even late term abortion coverage and offers no religious exemptions. This is a violation of the federal Weldon Amendment.”

The Thomas More Society, a private, nonprofit law firm that focuses on religious freedom issues, acknowledged in its press release that the letter was dated in the final hours of the Trump administration and that it was unclear whether the new Biden administration would pursue the investigation. President Joe Biden has frequently expressed his support for abortion rights.

“The law is the law, regardless of who holds office,” McHale said in a separate email statement to Capitol News Illinois. “We would certainly expect the new administration to uphold the rule of law and ensure that all of its agencies are charged with doing the same.”