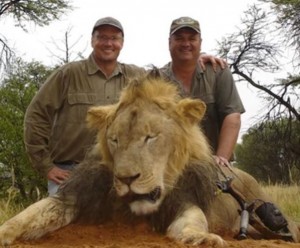 Walter Palmer (left) poses with his trophy, Cecil the lion.

I think we all can agree that we wouldn’t want to be Walter Palmer right now. He’s that Minnesota dentist who’s suddenly become the object of intense contempt for killing Cecil the lion. Palmer, whose hobby-sport is big-game hunting, shot and killed in a gruesome (and allegedly illegal) way the majestic black-maned lion Cecil, who had captured the hearts of the people in Zimbabwe and animal lovers around the world.

Palmer pays big money to hunt down various exotic animals. He apparently displays their heads as trophies. But now his life is in danger, or it certainly seems that way. At the very least, he is the target of scorn that oftentimes veers into the ominously threatening.

But let’s take a step back and ask ourselves a few questions. If he is an immoral man, what about the millions of other people who hunt for sport, who cannot wait to go out during deer season or to hunt bears or rabbits or whatever species that simply want to go about their business but are suddenly ambushed, their lives taken for human recreation? Is that any less appalling?

By the way, it should be mentioned that Dr. Palmer didn’t hunt Cecil the lion with a gun. A crossbow was his weapon of choice. But the point is that hunting for sport is celebrated here and across the world. So how is ending the life of an innocent deer, which suffers fears and pain like humans do, ethically any different? At least, it’s a question we each need to ask ourselves before we so vilify the man who killed Cecil.

But let’s not stop there. We also need to address our preference for eating meat. Most of us do, but it’s not necessary. We can live better without consuming any flesh or muscle. All of the nutrients we possibly could need can be provided by a plant-based diet. In fact, it’s much better for your body.

Not only that, but raising meat animals is rough on the environment. And we all know that those chickens, cows, calves and fish don’t die of old age before we eat them. They are slaughtered, often after suffering tortuous existences, or pulled from the sea to suffocate. We don’t give any of that a thought before we chow down and suffer the significant physical health consequences.

Yet, we get completely outraged when we see or hear of someone mistreating a pet. I am among those who wishes nothing but harm on an animal abuser, but isn’t killing even worse?

I’d like to point out how ridiculous it is to me to go into one of those grocery stores that aim to impress shoppers who believe it’s hip to care about the environment. These markets have signs all over the place, talking about the humane way they treat their livestock. Of course, they leave out the part about driving them to slaughter so that we can devour them. But I suppose it’s a step in the right direction.

Certainly, Walter Palmer needs to face the consequences of his deadly brutality. But maybe we all need to look at ourselves and question whether we are complicit in abhorrent habits that devalue life.