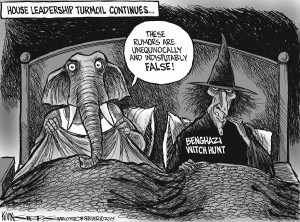 Well, the United States can take a short breath of relief. The members of Congress have taken a break and gone home. We’re safe for a little while. And, yes, that’s a cheap shot at the House of Representatives, specifically at those who run the House. But they make it so easy.

The latest embarrassment for them is that nobody wants to be the leader, nobody who has half a brain, anyway. John Boehner, whose critics even acknowledge does have at least half a brain, finally used it and said he was outta there, that the sniping from a group of conservative hard-liners (no more than 30 members or so in a party majority of 247) was making it impossible to get anything done. Specifically, they are such true believers that compromise with Democrats — particularly their Satan, Barack Obama — became impossible.

Never mind that in a democracy, where dictating isn’t usually the way of governing, reaching consensus with those who disagree is the only alternative. But the zealots reject any accommodation. They call themselves the Freedom Caucus, and they’re a relatively small faction, but they’ve stifled any freedom of movement toward a resolution of the many measures that are necessary keep the government functioning and, for that matter, even solvent. Egged on by various demagogues, they have become a tyranny of the minority, threatening to gum up the works unless they get their way. In other words, they legislate by tantrum.

So Kevin McCarthy, the man Boehner backed as his replacement, suddenly decided that he didn’t want to be sucked into the vortex of insanity and pulled the plug. That, by the way, came after some militants on the right circulated rumors that he was having an affair with a congresswoman, which they both vigorously deny. The extremists don’t like Kevin McCarthy either; like John Boehner, he’s also too willing to wheel and deal. Finally McCarthy decided this was too ugly even for politics, so he dropped his bid to be speaker. With that, everybody left town. Mercifully.

Yes, it’s easy to ridicule, and I personally take every opportunity to do so, but the buffoonery we witness on Capitol Hill certainly is matched by what we see in the presidential race, where Donald Trump, Carly Fiorina and Ben Carson, among others, are tapping into a widespread anger at the incompetence and thievery that has left our society in dire straits, where nobody can expect fairness. The mood is bitterness, and the Donalds of this world know just how to exploit it. Citizens are so upset about the con job they’ve gotten from the establishment that they don’t care whether the “outsiders” are truthful or hateful bigots, or make any sense whatsoever. The problem is that their hostility is justified.

The mindless rigidity we’re seeing in the House of Representatives and the divisiveness we’re suffering through from the campaigners isn’t going to achieve anything. The die-hards can’t be allowed to take us all down. We all need to insist that the quality of those we elevate to our highest offices are worthy of the honor. Regrettably, those we’ve chosen mostly are dishonoring the process. We must do better.

— Opinion: The Fools on the Hill —