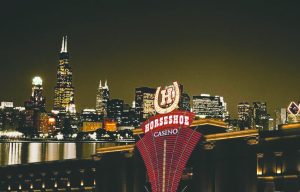 (Third in a series looking at Illinois’ gambling expansion)

Despite Illinois having nearly double the population of neighboring states, its casinos are not reaping the rewards.

Casino revenue from Illinois trails that of Indiana, Iowa and Missouri despite the Land of Lincoln having at least 6 million more residents than any of those other states. Illinois’ casino revenue has continued to trail those other three states for the past four years.

Wisconsin does not have public casinos, but does have tribal gaming facilities throughout the state. The closest Wisconsin casinos to Illinois’ border are in Milwaukee and Madison.

The only uptick in casino revenue for Illinois in the last 10 years occurred in fiscal year 2012 when Rivers in Des Plaines opened. Casino revenue in the state hit $1.6 billion that year.

One major reason for lagging Illinois casino numbers is that gamblers are not keeping their money in the state. Nearly 50 percent of the Chicago area casino market is gobbled up by the five Indiana casinos beckoning just over the state line.

Even a distant Michigan casino takes a bite out of Illinois’ casino revenue.

Four Winds Casino in New Buffalo, Michigan, despite being 1½ hours away, dents the Illinois gambling market, according to state lawmakers who authored the report “Wagering in Illinois: 2019 Update.”

“While somewhat far from Chicago, the casino offers low-cost shuttles from several Illinois locations to entice gamblers to its venue,” the lawmakers wrote.

Competition for gambling dollars will only increase as Illinois adds six casino licenses and other states also ramp up their efforts.

Here is a look at how other states could continue to siphon off potential Illinois gambling revenue: 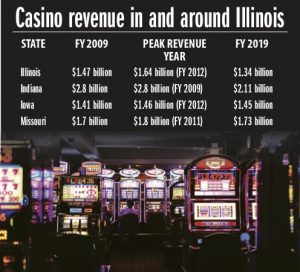 However, the story isn’t all sunshine and roses for the neighboring states. Casino revenue in Iowa and Missouri has held steady since fiscal year 2009, while Indiana’s adjusted gross receipts from casinos have dropped 24 percent since FY 2009.

“It is likely no coincidence that the recent trend of stagnating or declining (casino) revenues across the Midwest has occurred during the same period that video gaming has taken off across Illinois,” lawmakers said in the “Wagering in Illinois” report.

Tom Swoik, executive director of the Illinois Casino Gaming Association, said Illinois casinos could be at a definite disadvantage compared to their peers in neighboring states when it comes to sports betting.

“Our license fee is up to $10 million. Our tax rate is double Iowa’s and triple Indiana’s,” Swoik said, “and their sports wagering facilities are already up and running.”

Swoik said Illinois lawmakers may have pie-in-the-sky expectations about sports wagering in the state.

Part 2: Is luck running out for Illinois casinos?