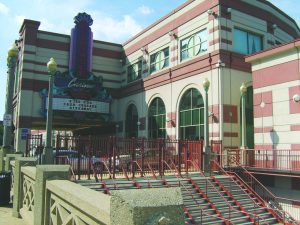 Hollywood Casino in Aurora is one of 10 Illinois casinos. Gaming expansion will add six more casino licenses in the state. (City-Data photo)

Illinois faces long odds in getting anywhere close to the revenue it has projected through an expansion of gaming, according to one industry expert.

“They had the intent, but what they have done is add so many fees and such high fees that they have limited the people who will apply for those licenses,” Swoik said. “… They are not going to get anything near what they are thinking they will get.”

He said lawmakers think that each casino license could go for $200 million or $300 million, believing that gaming companies will get into a bidding war. Swoik said the way the gambling expansion is structured, some of the new casinos could be paying more than 100 percent of their revenue in taxes.

“Who in the hell is going to buy a license, if that is the case?” Swoik asked.

The Gaming Association director said he has been fighting against expansion of gaming in the state for years, but that he and other industry experts had no chance this year of heading off some lawmakers “who think gambling is the golden goose.”

He said lawmakers pushed through the gaming expansion in just three days with no input from him or other industry experts.

Swoik said with revenues down at every casino in the state except Rivers in Des Plaines, adding six more players to the mix — not to mention the increased competition from neighboring states seeking residents’ gambling dollars — will simply begin the cannibalization process where casinos fight for pieces of a finite pie.

The state’s Commission on Government Forecasting and Accountability forewarned of that scenario in its report, “Wagering in Illinois: 2019 Update.”

“It is expected that cannibalization at existing Illinois casinos is inevitable, especially in the Chicago metropolitan area where the majority of the gaming expansion will take place,” the commission stated. “The extent that revenues from these locations will suffer remains in question. Some would argue that many portions of this metro area are already near saturation, even without gaming expansion. This is in large part due to the extensive expansion of video gaming terminals to this area in recent years.”

The commission noted that since video gaming came onto the scene in 2012, the 10 casinos in the Chicago metropolitan area (seven in Illinois and three in Indiana) have seen their adjusted gross receipts fall from $2.2 billion to $1.8 billion, a seven-year falloff of 16.4 percent.

Swoik said reaction to gambling saturation could already be showing. He noted that Churchill Downs, which owns Arlington Park racetrack and is the majority owner of Rivers Casino in Des Plaines, has said Arlington will take a pass on becoming a racino — combined horse track and casino.

He said that is a significant change because Arlington, under former owner Richard Duchossois, had continually fought for gaming slots at the racetrack.

With Churchill Downs already holding a majority share of Rivers Casino and in the running for the casino license for Waukegan, Arlington Park could be in competition with the other two Churchill Downs entities to gain casino gaming dollars, he noted.

Swoik said he and others in the gaming industry were caught by surprise with the quick, rapid decent of casino attendance once video gaming burst on the scene in 2012.

“Our admissions are down 3 million to 4 million a year,” Swoik said of casinos. “Those people are going someplace.”

He said where those gamblers are going is not mystery. Swoik said Springfield — which has the most video gaming machines of any community in the state — is a prime example.

“Those people used to go to (the) Alton (casino) a couple times a month,” Swoik said. “Now, they stay home from the casino and go to their local bar once a week.”

He said the gaming expansion plan was not given adequate attention before coming up for a vote.

“I think it is a very unthought-through plan,” Swoik said.