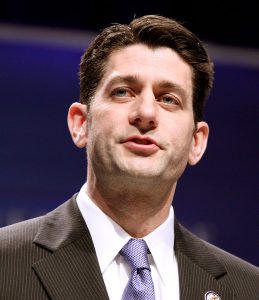 Of all the Republicans displaying their two faces in accommodating Donald Trump, none is more obnoxious than Paul Ryan. Ryan has spent years carefully constructing his own pedestal upon which he has placed himself as the conscientious conservative intellectual who is above petty politics. It was the platform from which he maneuvered to become House speaker. It turns out that the pedestal is nothing more than a sanctimonious mirage.

By endorsing Trump, while at the same time expressing concern about the GOP presumptive nominee’s various dangerous demagogic rants, Ryan has demonstrated that he’s just another opportunistic partisan hack, selling his alleged soul to the devil of expedience.

It is calculation, not principle, when he tries to rationalize his decision by having it both ways: “It’s no secret that he and I have our differences. I won’t pretend otherwise. And when I feel the need to, I’ll continue to speak my mind. But the reality is, on the issues that make up our agenda, we have more common ground than disagreement.”

It wasn’t a day later before Ryan seized on an opportunity to demonstrate that he is still St. Paul when he criticized Trump for his bigoted attacks not just on the federal judge handling the Trump University litigation, Gonzalo Curiel, but on the concept of judicial independence.

“It’s reasoning I don’t relate to,” Ryan said. “I completely disagree with the thinking behind that. And so, he clearly says and does things I don’t agree with, and I’ve had to speak up from time to time, and I’ll continue to do that if it’s necessary. I hope it’s not.”

Still, he’s going to vote for the man who has advocated the forced removal of 11 million illegal immigrants, who would bar almost all Muslims from entering the country, who is a proud misogynist, a serial liar, on and on ad nauseam. Why? Because Donald Trump, says Ryan, is someone he can work with to turn Paul Ryan’s agenda into reality.

The real Paul Ryan agenda is promoting himself. He has enjoyed great success by presenting himself as above all the ambitions that motivate normal mortals in this netherworld of politics. He has hidden his lust for power behind a facade of rightward righteousness. Now, however, he has shown his true colors, which is whichever ones get him ahead at the moment.

Ryan is certainly not the only one from the formerly Grand Old Party who has decided that Republican unity is paramount, particularly when faced with the prospect of a Hillary Clinton presidency. They speak scornfully about the voters’ perceptions of her dishonesty, or bemoan the possibility of “a third Barack Obama term.” They choose for a variety of reasons to ignore the perils of a President Trump. So they’ve decided to get along by going along.

There are words that describe those who cooperate with occupying forces, but they are such loaded terms that I won’t use them here. It’s tempting. At least most of them have openly acknowledged they are practitioners of the political dark arts. Paul Ryan, in the meantime, has managed to hold himself out as somehow virtuous. With his Trump endorsement, however, he shows he’s nothing more than a mundane hypocrite.