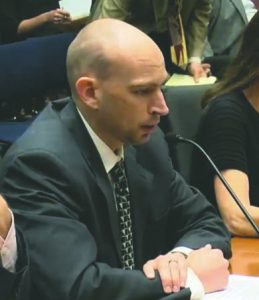 Jason Keller, legislative director for the AFL-CIO, said that wage theft continues to be an issue in Illinois. He said fixing wage-theft issues in the state is like playing Whac-A-Mole, with new problems popping up once one is tamped down. (BlueRoomStream)

Legislation is pending in the Illinois Senate that would target wage theft in the construction industry.

The state House bill, sponsored in the Senate by state Sen. Laura Fine (D-Glenview), would require contractors on any private construction job in the state to ensure that all employees on the job, including those of subcontractors, are paid the correct wages.

Jason Keller, legislative director for the AFL-CIO, said wage theft continues to be an issue in Illinois.

“Wage theft is an issue that cuts through all types of work, public and private workers, and over many years,” the labor union representative told a Senate panel examining the issue in mid-July. “… Sometimes it feels as if we are playing a game of Whac-A-Mole. When we fix one problem, employers find a new way to gain the system to cheat workers.”

Sophia Zaman, executive director of the Raise the Floor Alliance, which supports low-wage workers not already part of collective bargaining units, said at the July 18 hearing that there are real, devastating consequences of how wage theft plays out in the state.

She gave the example of two Chicago day laborers, Bonifacio Sandoval and Miguel Gomez, who did construction work on a home being remodeled three summers ago. They worked 10 hours a day in the hot summer sun, but didn’t get paid for weeks, according to Zaman.

“They would work and hope they would be paid and the employer just kept coming up with excuses,” Zaman said.

She said the employer still owes the two workers more than $10,000 for the work performed in 2016.

“This act of wage theft had devastating repercussions for these two members,” Zaman said. “Because Bonifacio was waiting for his old wages, he didn’t have enough money to pay taxes on his own home and, as a result, lost his house. He also had to hire a lawyer to help him file a claim. Those lawyer fees put an immense financial burden on his family, causing enough stress that the family actually had to separate. Meanwhile, Miguel has also been struggling to make ends meet and has been forced to use his entire savings to cover his mortgage payments. 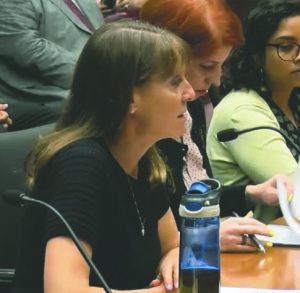 State Sen. Laura Fine (left, D-Glenview) talks with fellow lawmakers about her proposed legislation targeting wage theft in the Illinois construction industry. On the July 18 panel with Fine were (from left) Alison Dickson, an instructor in the labor education program at the University of Illinois; and Sophia Zaman, executive director of the Raise the Floor Alliance. (BlueRoomStream)

“Bonifacio and Miguel’s stories are not the anomaly, they are the routine.”

Bill Ward, executive vice president of the Homebuilders Association of Illinois, said while he and others in the construction industry support clamping down on wage theft, the way the legislation, which passed the state House in April, is written those abiding by the law can still pay a price.

“It punishes the innocent,” Ward said of the legislation. “We stand with the proponents on wage-payment law as far as anyone who has committed wage theft to a worker should be punished and should pay their wages they owe their employees.”

He noted that the bill as written allows individuals to go after contractors over wages even though those contractors may have paid subcontractors in full.

Ward said a DuPage County home builder he talked with said he would probably go out of business, if the legislation passed, because it would require him to need a $4 million revolving loan to cover the $200,000 in labor costs for the 20 homes he builds per year.

“Illinois is right now, and has been for eight years, 50th in the country in new home construction and so far this year we have dropped by 7.5 percent. So we’re still going down,” Ward said. “When the recession came, 85 percent of our market left the state of Illinois … We cannot sustain this bill as it is written.”

Bill Viggnochi, treasurer of John Keno & Company, Inc., a construction and excavation firm in Chicago, said that no one is in favor of wage theft, but the legislation as written would stifle cash flow in the industry.

“It would impede payments to all subcontractors on all projects, impede project funding and possibly transfer of title,” Viggnochi said.

He said contractors rarely know the third- and fourth-level subcontractors on a job and definitely don’t know their business practices. 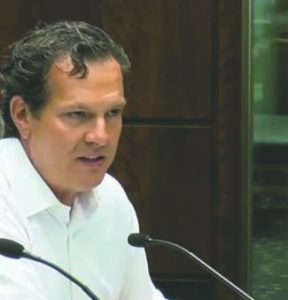 Bill Viggnochi, treasurer of John Keno & Company, Inc., a construction and excavation firm, said the proposed legislation is “bad for business, bad for construction, and it’s bad for Illinois.” (BlueRoomStream)

He called requirements under the legislation an “administrative nightmare for all parties involved, with no guarantee of accuracy.”

“The proposed bill is bad for business, bad for construction and it’s bad for Illinois,” Viggnochi said.

Senator Fine said she will continue to work to find common ground on the legislation.

“We’re trying to find a place where we can land,” Fine said. “… There is an issue out there and we do have to resolve it.”