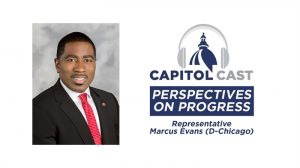 SPRINGFIELD — Rep. Marcus Evans would like to see the conversation around policing in the U.S. and Illinois focus on “bad individuals” using police powers wrongly, rather than as a condemnation of policing in general.

In an interview with Capitol News Illinois for the news bureau’s “Perspectives on Progress” series, the Chicago Democrat called a video depicting the May 25 death of George Floyd a “reflection of my reality.”

“I’ve been harassed by every, pretty much every, police department in the Chicagoland area at one point in my life and I don’t have a criminal background, never been in serious trouble, but it’s just that standard behavior, you know of, I don’t want to say the police, but individuals who use police powers in the wrong way,” Evans said. “I hate saying ‘the police’ because nothing wrong with the police. The issue is bad individuals are utilizing police powers. I think that’s really a way I wish we could start crafting it.”

Evans is one of 31 members of the Illinois Legislative Black Caucus, many of whom have been sharing their perspectives and experiences for the Capitol News Illinois podcast series in recent weeks.

He said while he appreciates police, and “everyone loves police officers because every type of person has a police officer in their life, no matter your color, race,” eliminating police abuse of power is a “human issue.”

He said he was glad there was video of Floyd’s death, which came as a Minneapolis police officer, Derek Chauvin, knelt on his neck for nearly nine minutes.

“At least with video, people who don’t have experience can see that, you know, we’re not lying, exaggerating,” he said. “I mean, these are actual realities, you know, that people have to deal with when bad individuals are given police power.”

Evans said while some would like to see swift change, progress is often “incremental” and is going to take more than just changing laws.

“I’m not always one to say we have to change the law to change society, necessarily,” he said. “Because a lot of this is really how you treat human beings, more so than, you know, law X, Y and Z.”

While Evans said he is supportive of “aggressive” policing in certain situations, there needs to be more scrutiny of police use of lethal force and how officers detain individuals.

“I just don’t think there’s ever been a real push to solve the problem,” he said.

He also said that the arrest on aiding and abetting charges of the three officers that accompanied Chauvin represents progress.

“This is how you tell people that, you know hey, justice – it should be a normalcy,” he said. “You shouldn’t have to fight for justice.”

From the governor, Evans said he would like to see resources directed into black communities.

“Now, resources…for example, you know, black people make a lot less than white folks, and they don’t have the same experience in general. And I think a lot of black people understand that and I think there’s a fight for equity and fairness, you know, economically, but that’s a different fight,” he said. “You can say, you know, hey, you have resources, what have you, but the fight for existence shouldn’t be this difficult.”

“Perspectives on Progress” is a special edition of the CapitolCast podcast series, and previous episodes can be found at capitolnewsillinois.com/perspectivesonprogress or on your preferred podcast app.