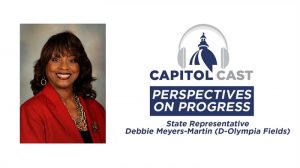 SPRINGFIELD — Rep. Debbie Meyers-Martin said her summer plans include identifying police reforms that will reduce officers’ use of force.

It is “fortunate,” the Olympia Fields Democrat said, that someone recorded a white Minneapolis police officer killing George Floyd, an unarmed black man, on May 25.

“But who knows how many times this occurs on a daily basis and there’s no camera and no one knows that it happened,” she added.

Improvements in policing could come from “serious” training changes, such as adding diversity, ethnic sensitivity and civil rights classes to officers’ education, including a layer of community oversight and amending the body camera laws, Meyers-Martin said.

The key is to determine which policies can be “tweaked,” which ones can be changed and where a new law is needed “so that we don’t find this happening over and over and over again,” the representative said.

Meyers-Martin, who represents Chicago’s south suburbs, spoke with Capitol News Illinois for the “Perspectives on Progress” podcast series, a collection of conversations on race in Illinois and the U.S.

Society must alter its “attitude” and outlook about race, she said — that is one of the “biggest changes” necessary.

“The premise of fairness and equity and racial justice, those are not real. No one is doing you a favor by being fair or being equitable,” the representative said. “It’s our right, as a culture and as an ethnicity and a race of people, to be treated that way.”

“Disrespect and certainly violence” erupt from people who do not hold that as a basic tenet, she added.

Meyers-Martin said watching the demonstrations held throughout the U.S. and in several other countries in response to Floyd’s death “feels good,” because the public outcry is evidence people view systemic racism as “a wrong that needs to be corrected.”

But, she said, she hopes protests and any reforms that come in their wake are meaningful, not “just a temporary Band-Aid to something very tragic.”

The representative also urged residents to treat racial inequities as a “continuous fight” that requires “continuous involvement and engagement.” In addition to criminal justice and police reforms, it is important to “rebuild and recover our communities.”

“I mean, there’s a lot of ways that I think that we can be effective going forward in addressing some of the ills that we have witnessed over recent years, so I’m excited to begin to roll up our sleeves and begin to address some of those issues,” Meyers-Martin said. “And I’m hoping that we will get universal buy-in to doing that and maybe, you know, what we have seen in terms of the protests and the seemingly interest in making real change will help us do that.”

The news media has a role to play in societal improvements, she added. Reporters should “focus on positive aspects of a story” as well as negative ones.

But to make any lasting change, people must work together, the representative said.

“I would just encourage people to be open-minded, and to really know that the future now is in everyone’s hands,” Meyers-Martin said. “I mean, we’re almost starting from scratch, and so the future can be anything that we want it to be. But we’ve got to work together.”