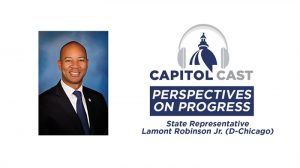 On May 25, a white Minneapolis police officer killed Floyd, an unarmed Black man, by kneeling on his neck for nearly nine minutes. That incident set off daily demonstrations across Illinois and the U.S. calling for an end to systemic racism and use of excessive force by law enforcement.

“There should not be a ‘have’ and ‘have not’ society. There should be one society where all people are doing well and flourishing,” the Democratic representative said. “…My ask is that we all do our part. That part could simply be reaching out to your legislator and your elected officials and letting them know that they need to get back to work and they need to right the wrongs that are in our society right now.”

Robinson is a first-term lawmaker who replaced Lt. Gov. Juliana Stratton in the House, an adjunct professor at the City Colleges of Chicago and the first Black LGBTQ individual to serve in the state General Assembly.

He spoke with Capitol News Illinois for its “Perspectives on Progress” series, a collection of conversations about race in Illinois, describing improvements he said the Legislature needs to implement.

The 31-member Illinois Legislative Black Caucus, of which he is a member, is working in both chambers of the General Assembly to map out reforms — police rehabilitations, economic development and unemployment support improvements, for example.

But to achieve those changes, Robinson and a handful of his colleagues want the House speaker and Senate president to call for a special legislative session.

As the owner of two AllState insurance agencies, Robinson said he understands that small businesses are the “backbone of any community” — they hire local people and directly contribute to their neighborhoods.

Robinson said state government must allocate funds to help them “get back to some semblance of normalcy,” especially after COVID-19-related economic slowdowns and property damage resulting from some of the protests.

Officials must also address the inequitable distribution of state contracts, which he said are commonly granted to white-owned businesses as opposed to enterprises owned by minorities or women.

“This is the time now that we have to put our demands out, and we have to put pressure on folks in leadership to be able to right the wrongs that we’ve been dealing with for almost 50-plus years,” Robinson said.

Legislative leaders, agency directors and members of Gov. JB Pritzker’s administration are “absolutely listening” to public outcry, he added, particularly because protests and demonstrations are not limited to the Chicagoland area.

“You cannot make a left turn or a right turn or turn on the TV without hearing what’s going on,” the representative said. “So absolutely, I think this is affecting everybody across the state.”