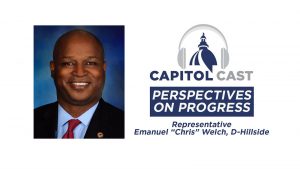 SPRINGFIELD — In the wake of nationwide protests over the death of George Floyd, Chicago-area Rep. Emanuel “Chris” Welch is calling for a statewide response to hold police accountable for excessive use of force and to address what he sees as “institutional racism” that has devastated many black communities in Illinois.

“We need a statewide system where bad police officers can be held accountable for the deaths of our black men and women in Illinois and across this country,” he said during a recent interview. “We can’t have police officers fired from one department and then bounced to another department. We have to hold them accountable. But we also have to address poverty. We have to create a pipeline to advance black students at community colleges, state colleges and private universities.”

Welch, a Democrat from the western Chicago suburb of Hillside, spoke during a podcast interview as part of Capitol News Illinois’ Perspectives on Progress series, a collection of conversations with black leaders in Illinois about their views on the current state of unrest in the United States and how they believe the state can move forward.

The protests erupted in the days after George Floyd, an unarmed black man in Minneapolis, died as a result of a white police officer holding him on the ground with his knee on Floyd’s neck for nearly nine minutes while three other officers stood by and did not intervene. Floyd’s death was captured on cell phone and security camera video, and the footage immediately went viral on the internet.

“I watched the video a couple of times and I was just in disbelief that that was actually happening, or that it actually happened,” Welch said. “To see that officer’s knee on his neck as he basically pled for his life, and the officer completely indifferent, was just unbelievable. I mean, I was really left speechless by the disbelief.”

But that video was just one of the latest in a long succession of such killings of unarmed people of color, reminding people of Trayvon Martin, a Florida teenager shot and killed by a neighborhood watch captain in 2012; Michael Brown, the black teenager whose shooting death by police sparked riots in Ferguson, Mo., in 2004; and Breonna Taylor, a 26-year-old emergency medical technician who was shot and killed by police in her own home in Louisville, Kentucky in March of this year.

Together, those deaths and many others have exposed the extent to which African Americans and other people of color are treated differently by law enforcement agencies, the result, many say, of a pattern of systemic racism that has existed in America for more than four centuries.

All four officers involved in Floyd’s death have since been fired. One is charged with second-degree murder while the other three are charged with aiding and abetting in the crime.

But even that has not been enough to quiet the anger of people who have taken to the streets, including the streets of Chicago and its surrounding suburbs, where peaceful protests last week escalated into violence and looting.

“I do not under any circumstances … condone the violence and the looting,” Welch said. “I don’t think it’s ever right to break into businesses, burn police cars, damage reporters’ equipment and hurt reporters, people that are just doing their jobs. I don’t condone that.”

To address poverty and racism in Illinois, Welch said, the state should first make higher education more accessible to people of color.

“We have some of the top institutions of higher learning in our state, but the representation of black students is pathetic,” he said.

“When hospitals are closing across the state, where are they closing? They’re closing in black and brown communities like Westlake Hospital did in mine,” Welch said. “We’re the first ones on the chopping block.”

He also said Illinois should also make sure that high-paying jobs being created through the state’s new capital plan, Rebuild Illinois, are available to African Americans.

“When I drive through construction zones all over the place. I don’t see anyone that looks like me. Those jobs pay at least $45 an hour and time and a half at 60-$70 an hour,” he said. “You address poverty by inclusion, and we need to be part of those capital projects all over the state. Health care.

Finally, Welch urged Gov. J.B. Pritzker to begin releasing federal funds the state is receiving through the stimulus packages that Congress approved for COVID-19 recovery and focus that money on communities of color that have been hit by both the business closures caused the pandemic as well as the rioting and looting that have taken place in recent days.

“Businesses are struggling and we’ve got to address it right away,” he said. “Poverty is real. People are already at home for the last three months. You know, many of them unemployed and can’t get through to our flooded (Illinois Department of Employment Security) system. They didn’t get a stimulus check. People are acting out. We need immediate stimulus checks so that people can be fed and clothed.”