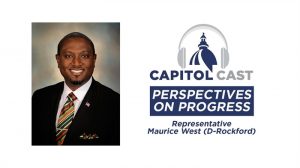 SPRINGFIELD – In the wake of the protests and violence that have beset many communities in Illinois, state Rep. Maurice West says he thinks it’s time for everyone to listen to the voices of people who rarely get to speak.

A Democrat from Rockford and a member of the Illinois Legislative Black Caucus, West talked candidly during a podcast interview as part of Capitol News Illinois’ “Perspectives on Progress” series. He talked about the demonstrations that took place in his community and the mood of his constituents in the wake of the death of George Floyd, the unarmed black man who was killed in Minneapolis by a white police officer May 25.

West, who grew up in Rockford, is serving his first term in the General Assembly. Before running for office, he worked as a career counselor for the Dislocated Workers Program and Rock Valley College. He is also an ordained minister.

In talking about people whose voices haven’t been heard, West said he wasn’t just talking about those who’ve been marginalized in society because of their race or poverty. In the conversation about race, he said, many people are afraid to speak out.

“I had a great conversation with a member of law enforcement,” he said. “He’s scared to say anything. He wants to say something, but he’s scared to say something because he’s being stereotyped as a bad police officer, because he’s in law enforcement now. And I said to him, ‘Black people get stereotyped all the time as being bad because we’re black.’ We can we can build on that similarity in terms of stereotypes.”

“And so, it’s all about also bringing police into the conversation, understanding how they’re feeling and where they’re coming from, and build from there,” he said. “That’s not a popular thing to say because you hear all these people say, ‘F the police?’ Well, that’s not gonna help us to get to where we need to be. Conversations have to be two-sided, which means police must be a part of the conversation as well.”

West also said he believes the news media should play a role in promoting cross-racial understanding by amplifying the voices of those who are often reluctant to talk about race.

“I think coming from the media you guys have the best platform right now,” he said. “And to utilize your platform, to talk with those who are unfamiliar, to who feel that they’re voiceless and let them, let them be wrong, let them be vulnerable with how they’re feeling, so that we can hear them and people around us who are may not be black and that may not understand what we’re going through, can hear them and really hear the emotion and rawness to their story. It is time for us to be vulnerable on both sides.”

Still, one of the biggest challenges to achieving racial equality in America, West said, is getting white people to fully appreciate how differently people of color are treated, not just by law enforcement but in virtually every aspect of life – education, housing, employment and in all types of personal interactions. But he said he had one recent experience that gives him hope it can be done.

“I saw a guy on Facebook talk about ‘I’ve never thought I dealt with white privilege. I’m a white man. And I always argue that I don’t have white privilege. But I see now that I have a GED and I have a great job that I got 1976. And a black man in my same position will not have received that job in 1976. So I do have privilege.’ That that story by itself resonated with me because he, he got it now, like he is understanding that you may not live it, but finding a way to understand it is where we need to get to right now. And the media can play huge role in that.”

In the immediate aftermath of protests in Rockford, Chicago and elsewhere, West and other members of the Illinois Legislative Black Caucus held a news conference in Rockford to call for an emergency session of the General Assembly to pass social and economic reform legislation.

So far, Democratic leaders in the Illinois House and Senate have not endorsed that idea. Lawmakers are not scheduled to return to Springfield until November for the start of the fall veto session.

When asked what he would like to see from his colleagues, West said he simply wants them to listen.

“The biggest thing I would like to see from both sides of the aisle that any legislation brought to the General Assembly from the Black Caucus that’s focused around police reform, that they, no questions asked, get on board,” he said. “We’re not trying to restrict or punish the police. That’s not the approach we’re coming from. We’re trying to right some wrongs. And if you can’t get on board, then why should we get on board with you? This is this is not about you at the moment. The black community needs support in this time. Please stand with us. Just like we stand with you on legislation that you bring forward. That’s what I’m asking from my colleagues.”

“Perspectives on Progress” is a special edition of the CapitolCast podcast series, and previous episodes can be found at capitolnewsillinois.com/perspectivesonprogress or on your preferred podcast app.