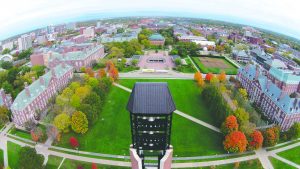 The University of Illinois at Urbana-Champaign leads the way in the state’s public institutions of higher education getting discretionary capital dollars in the infrastructure bill. The Urbana-Champaign campus will get more than $195 million to spend on capital projects.

Half of the more than $1.6 billion going to public institutions of higher education in Illinois as part of the infrastructure bill has not been designated for specific projects.

A Chronicle Media analysis of the spending plan, financed through a doubling of the state’s gasoline tax and increased license-plate renewals, shows a whopping $833.6 million of the money is allocated for discretionary spending.

The legislation labels the untargeted funds as being for “miscellaneous capital improvements including construction, capital facilities, cost of planning, supplies, equipment, materials, services and all other expenses required to complete work at the various higher education institutions. These appropriated amounts shall be in addition to any other appropriated amounts which can be expended for such purposes.”

Real specific, right? Public colleges and universities can pretty much use the funds for any capital improvements they deem appropriate and not have to justify the expenses to anyone, critics of the spending plan said.

More than $172 million of the capital money is being funneled through the Illinois Community College Board for the same broad “miscellaneous capital improvements” that is mentioned earlier in the legislation.

The hike in the gas tax was pitched as a way to address crumbling roads, bridges and public buildings, but more than half of the capital money going to higher education will finance new buildings or additions on college campuses.

A Chronicle analysis found that less than 2 percent of the infrastructure money going toward higher education will go strictly for pre-determined renovations and remodeling without new construction being tied to it.

Regarding building additions, Illinois State University is being allocated nearly three times the money as any other public institution of higher learning for renovation, rehabilitation and an addition to the university’s Milner Library. ISU will be getting $89.2 million for the project. The nearest addition project to the ISU library is Oakton Community College, which is getting $31.8 million for an addition and remodeling to its Des Plaines campus.

Schuster, who wrote a report on the capital bill for IPI, said there are countless examples, such as new buildings for colleges and universities, where the gas-tax money is not going for infrastructure improvements.

“There is a lot of pork and waste,” Schuster said.

He noted the capital bill was a rushed-through piece of legislation when it should have been carefully studied.

“The whole bill is several thousand pages. It was passed in one weekend,” Schuster said. “Legislators had just hours to read it before the vote. They were not able to read all of it and negotiate. Many rank-and-file members did not know what they were voting on. It robbed citizens of their voices in Springfield.”