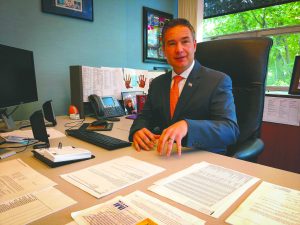 Bill McCarty, director of the city of Springfield’s Office of Budget and Management, argues the state-mandated target that pensions reach a funding level of 90 percent by 2045 has added unnecessary cost to the system. (Photo by Tim Jones/Better Government Association)

In the heart of Illinois, the city of Peoria cut its workforce by almost one-fifth to pay its annual obligations for police and firefighter pensions. In northern Illinois, Waukegan is selling bonds to keep the city operating. In the east, Danville closed one of its four fire stations, following mounting pension bills. And in the state capital, Springfield — for the first time — is pouring every dollar it collects in property taxes into public safety pensions.

All across Illinois, in many of the small towns and larger cities that manage some 650 independent police and fire retirement systems, those funds have placed an increasingly tightening vise on municipal finances.

Much of the focus on the pension problem in Illinois has been on the massive liabilities facing the five statewide funds as well as Chicago’s citywide pensions. But in many ways the more pressing pension issues can be found in the towns in every corner of the state.

In Illinois’ 28 largest cities beyond Chicago — those with populations of 50,000 or more — the rate of pension payment increases has outstripped the growth of property tax revenue by a factor of about 10 since 2012, a Better Government Association review of financial and pension documents shows. Five cities saw a net decline in property tax revenue between 2012 and 2018, while eight reported a cumulative gain of less than 10 percent.

During the same time period, the median increase of pension payments to the police retirement systems jumped roughly 53 percent; for firefighters it was about 58 percent.

Illinois has imposed a structure for police and firefighter pensions that is inherently inefficient but also distinct from the problems facing the statewide funds. Some cities, many downstate, are hampered by declining tax bases as people and jobs leave. A town’s hands are tied with how it invests pension cash as well as the small size of its pension pools.

“No one would set up a system like this if they had it to do it again,” said Brad Cole, executive director of the Illinois Municipal League.

On average, the pensions are funded at 55 percent, which is 21 percentage points below the 2000 average. There is no single city that perfectly exemplifies Illinois’ pension predicament. There is, however, a common bottom line: mounting pressure on property taxes.

National surveys have shown Illinois near the top in terms of property taxes, mostly the result of the state being near the bottom in supporting public education. Pension demands are putting even more pressure on property taxes, forcing city leaders to make tough choices about cutting back on services or adding to the tax bills.

“There’s not enough natural growth in our revenue sources to keep up with pension costs, and, at some point, citizens say enough is enough and you can’t raise taxes,” said Bill McCarty, who as Springfield’s budget director for more than eight years has seen up close the slow strangulation of the city’s finances.

Last year every dollar of property tax revenue collected in Springfield went into the pension funds. Next year the bill will go up another $1.4 million, he said. Over 20 years, the cumulative effect of pension obligations is projected to exceed property tax collections by nearly $270 million.

Amid the increased pressure on municipalities, Gov. J.B. Pritzker earlier this month proposed a partial solution: consolidate the investment operations of the funds, with the intent of saving money and improving the financial returns on investments. The current system, the governor said, reveals the individual funds, on the whole, are “underperforming by nearly $1 million per day. That’s not just a missed opportunity — that’s a hole these funds are digging deeper every year.”

State lawmakers are expected to consider the measure during the fall veto session, which started Oct. 28.

While many mayors and budget officials applaud the governor’s bill, there is a general belief that this step is not the cavalry coming to the rescue. The numbers — unfunded liabilities, annual cost increases, state-mandated funding targets, longer life expectancy — are too daunting to be tamed by consolidation alone. 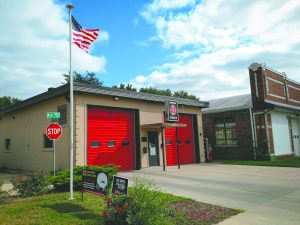 “You need to have structural reform to what the pensions look like going forward if there’s any chance for the municipalities to survive and not end up like the state of Illinois, where you’re dropping into 20 or 30 percent for the funding level,” said Reid Ottesen, the longtime village manager in suburban Palatine.

Amanda Kass of the University of Illinois at Chicago, who for years has been monitoring the performance of police and firefighter pensions, notes that while the state has its own serious problems with more than $130 billion in unfunded liabilities and an average funding level of about 40 percent, one of the lowest among the states, local governments have fewer tools to maintain the public safety pensions. The urgency, for them, is greater.

“It’s a hornet’s nest with a snake inside,” said Kass, associate director of the Government Finance Research Center at UIC’s College of Urban Planning and Public Affairs.

“If total revenue isn’t keeping pace with the year-to-year increase,” Kass said about the strain on municipalities, “we know that more revenue is having to be devoted to making pension payments. Which means service cuts, or not addressing service or infrastructure needs.”

What’s more, the obstacles are rooted in the demographic and economic disparities that define Illinois, a state where nine out of 10 counties are losing population and job growth is increasingly gravitating to metropolitan Chicago.

In Rockford, the city’s cost to maintain the police pension fund jumped 82 percent between 2012 and 2018, according to Rockford’s financial reports. The firefighter payments doubled.

In 2012, the city was spending $9.6 million on public safety pensions. In 2020, the budgeted amount is $20 million, Rockford Mayor Tom McNamara said. In 2025, he said, it will rise to $26 million. And by 2030, it will consume all of the city’s property taxes, which is the primary revenue source of the general fund. The city implemented a utility tax to help relieve the pressure, but it’s not enough.

Throughout the past seven years, McNamara said, the property tax levy has remained flat and now the city is approaching a breaking point.

“Something has to be done in the short term and long term to allow municipalities that are the size of Rockford to have some breathing room or some relief from these pension obligations,” McNamara said. “They’re growing at an exponential rate that we just simply can’t keep up with. We can only cut so much staff before we have to cut core city services, which we don’t want to do. We’ve got a lot of work ahead of us.” 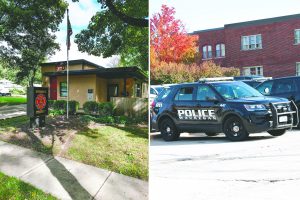 Pensions are having an impact in towns across the state. In Springfield, for instance, every dollar it collects in property taxes is now being used to pay off police and fire pensions. In Waukegan, the city is borrowing to pay for everyday services. (Photos by Tim Jones and Jared Rutecki/Better Government Association)

Farther south in Peoria, which in 2017 saw the headquarters of Caterpillar Inc. leave for the Chicago suburb of Deerfield, the pension squeeze was already tight before the company left town.

In the past five years, Mayor Jim Ardis said, the city workforce has been cut by about 18 percent, to 650. The majority of the cuts came from the ranks of police and fire, he said. The city outsourced engineering services and eliminated animal control. Early retirement offers are common, and many vacancies go unfilled, Ardis said.

In a controversial move, Peoria enacted a public safety pension fee — about $25 per property owner — which Ardis said should generate about $1.7 million annually.

“It’s been a constant tightening of the belt across the board in Peoria for the past decade, really,” Ardis said. “More people are retired than working. It’s a bad situation. It’s a perfect storm.”

For a decade, none of the money collected through the property tax levy has been spent on day-to-day services, said Tina Smigielski, the city’s finance director. Services such as residential garbage collection have been contracted out. Layoffs and early retirement have brought the employee count down from a decade ago. Money from a proposed casino won’t help until the doors are opened.

So, the city has paid its operating costs through bonds, said Mayor Sam Cunningham, who is aware of the long-term risks. “We can debt ourselves right out of business if we borrow rather than pay for services on an annual basis.”

“We want to take care of those who provide services to our communities. I would feel like a jerk if I wasn’t able to provide for their retirement after they put in their blood, sweat, tears and love into the city,” Cunningham said. “But we also have to balance what we have to do today.”

Even towns seeing a growth in population are feeling the pension reality bearing down.

Naperville, for instance, puts more money into the two funds than is required and has been able to maintain the police system at 77 percent funded and the firefighters at 75 percent. That’s not great but it’s near the top among all funds, nearly all of which are financially weaker than they were 15 years ago. Naperville’s population and economic prospects have soared since 1990, with the residential count increasing by nearly 75 percent to 148,000.

Despite a recent bump in population, Elgin Mayor Dave Kaptain said property tax revenue and riverboat casino earnings aren’t the reliable cash registers they used to be. As a result, the city borrowed $25 million a few years ago because it was behind on street repairs and pension costs were partly to blame, Kaptain said.

Across the state since 2004, there has been a nearly 54 percent increase in the number of retirees collecting pensions while the number of public safety employees paying into those systems has flatlined.

Some smaller communities face even greater financial peril, Kass said, because they don’t have the tax base to meet pension funding obligations and, because their pension systems are smaller, they are restricted in the kinds of investments they can make.

Danville, population 31,000, closed one of its four fire stations in 2017 amid mounting pension pressures. It enacted a special tax assessment devoted specifically to public safety retirement systems. The firefighters’ pension in Danville is 16 percent funded while the police is at 28 percent, according to state records.

Kass said the recession of 2008 seriously undermined pension funding levels and there has not been “a real recovery” in the past decade.

Back in Springfield, McCarty, who served in budget positions in the administrations of governors George Ryan and Rod Blagojevich, argues the state-mandated target that pensions reach a funding level of 90 percent by 2045 has added unnecessary cost to the system. He and officials from other cities say the target should be much lower — perhaps 60 percent — considering a city’s ability to make annual benefit payments and still have a financial cushion in anticipation of investment losses or market downturns.

“It’s an arbitrary number on a piece of paper that probably would make the rating agencies feel good,” McCarty said of the current 90 percent target. “It’s a vicious circle. … What they’re really doing is advocating for communities to increase taxes or cut services, making their communities less desirable to live in and they won’t live there. So, the money the city needs to pay for pensions and services won’t be there.”