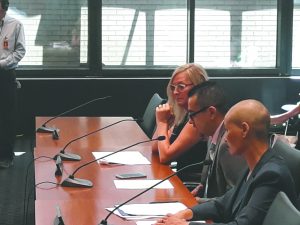 Michael Tafolia, an alumnus of the Education Justice Project, tells state lawmakers the importance of the program at the Danville Correctional Center “which taught me the humanity I almost lost.” With Tafolia on the July 8 panel in Chicago about prison censorship were Rebecca Ginsburg (forefront), director of the EJP program, and Holly Clingan, head librarian at the Danville Correctional Center. (Photo by Kevin Beese/Chronicle Media)

The removal of nearly 200 books from an Illinois prison’s library has put censorship in the state’s correctional centers in the spotlight.

Books removed earlier this year from the library at the medium-security Danville Correctional Center included “Visiting Day,” a picture book in which a young girl looks forward to the one day a month she gets to go visit her father in prison; and “Prison Grievances: When to Write, How to Write,” a book endorsed by Sister Helen Prejean, the prisoner advocate of “Dead Man Walking” fame.

“Most were books about social struggle; the majority concerned the history and experiences of African-Americans,” according to Rebecca Ginsburg, director of the Education Justice Project at the University of Illinois, which provides college courses for Danville inmates. “We received no notification in advance of the book removal and no notification after it took place.”

Ginsburg said EJP staff learned of the book removal from students in the program.

She said at a July 8 state hearing in Chicago on prison censorship that she was told in a phone call with the prison warden and Anita Bazile-Sawyer, the Illinois Department of Corrections’ chief of programs, that books about race were “divisive.”

She said the prison system’s head of internal affairs, Charles Campbell, and Danville warden Victor Calloway told an EJP instructor that in approving reading materials for inmates, they pay particular attention to what they referred to as “the three R’s — rapes, riots and race.”

Ginsburg said she is willing to work with legislators and IDOC leaders to create “fair and clear policy regarding the use of books and other academic material in Illinois prisons.”

She noted that two books she submitted to prison officials for approval in Danville classes were “The Souls of Black Folks” by W.E.B. Du Bois, a foundational text for the Civil Rights Movement; and “Uncle Tom’s Cabin,” an anti-slavery novel by Harriet Beecher Stowe. Both were rejected for use in the prison classes, Ginsburg said.

She said course readers that had been rejected were allowed back in as of Feb. 19 — a month after the spring semester began — but only provided the EJP program remove certain pages of content.

“It was the first time we were ever asked to literally tear pages out of course materials,” Ginsburg said.

Rob Jeffreys, acting director of the Illinois Department of Corrections, gave lawmakers few answers about the actions at the Danville Correctional facility, which were before his tenure began.

“I know we’re probably interested in knowing how and why it happened, but I’m more interested in moving forward,” said Jeffreys, who had been on the job just 38 days when the state hearing took place.

He noted that in his short time he has already been through every cell in 20 of the state’s prisons.

“We have a lot of work to do,” Jeffreys said.

He noted that education efforts must be prioritized in the state’s penal system “because 75-80 percent of these men and women are going home so they need to know that somebody’s out there looking out for them.”

“Reentry and the lack thereof is the main reason folks are returning back to incarceration,” Jeffreys said. “Education is the No. 1 key for employability.”

He promised full transparency of the Department of Corrections, noting that some of the agency’s policies, including the one covering the prison system’s Publication Review Committee, have not been updated since 2003.

Jeffreys noted that some of the books that came into questions in Danville are works that he has in his own personal collection. Nearly all of the books taken from the library have been returned, Jeffreys said.

He expected that going forward it would not be a case of the Danville facility against the Education Justice Project.

“It’s not us against the program. That program is part of our fabric of how we run facilities,” Jeffreys said. “Programs are our No. 1 security application … If you keep folks busy, if you keep them in programs, you challenge their thinking to change their behavior, that makes for a better-run facility.”

Alan Mills, executive director of the Uptown People’s Law Center, noted his organization has represented petitioners in two cases of censorship when DOC leaders tried to keep Stateville Speaks, a newsletter primarily written by and for incarcerated individuals, out of Stateville.

He said in his 40 years working with prisoners he has seen how important education is in their lives.

“Books provide a lifeline,” Mills said. “Education is obviously crucial both for the way people behave while in prison and their ability to survive once they get out of prison. It’s hard enough to make the adjustment to the outside world when you’ve been in prison for a while. Being able to do so without being able to read makes it impossible.”

Mills said because of budget cuts there is a waiting list for every education program at every prison in the state.

He said he has four lawsuits pending against the DOC because of censorship.

“The system is arbitrary and chaotic,” Mills said. “… The regulations are one thing and what actually happens is another.”