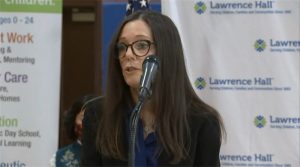 The Children’s Behavioral Health Transformation Initiative will help build a coordinated response between six state agencies in an effort to support children with behavioral health needs while increasing transparency in the process.

At the governor’s direction, the departments of Human Services, Children and Family Services, Public Health, Healthcare and Family Services, Juvenile Justice and State Board of Education are to take part in a working group aimed at bettering support for children in need of behavioral health services.

Dr. Dana Weiner, Chapin Hall child welfare expert at the University of Chicago, will serve as the director of the initiative. Weiner will work alongside members of the Pritzker administration to develop a blueprint by the end of the year for overhauling the state’s response to children’s behavioral and mental health needs.

“Our current system is difficult to navigate and does not provide families with consistent, transparent solutions to the challenges they face,” Weiner said. “This uncertainty can threaten the health development of children and the integrity and stability of families.”

Michelle Trager, a mother of four, told the story of how her oldest son, who is now 16 years old and lives in a residential facility in another state, has been in and out of the juvenile justice system due to significant health struggles.

Trager said they adopted him when he was 14 months old and as he aged he increasingly struggled with emotional and behavioral problems that impacted his everyday life. For more than a decade, Trager sought interventions and recommendations from professionals to help her son.

But she said it came to a point when her son’s behavior was disruptive and dangerous to himself and those around him. A comprehensive evaluation was performed that revealed the likelihood of her son having prenatal alcohol exposure with a background of early childhood trauma.

By the time Trager was advised and required by the school district to seek residential treatment, none of the limited number of facilities would or could accept him. Trager said at age 14, her son spent 331 days in county detention and continually harmed himself, resulting in multiple trips to the emergency room.

“Out of 10 (visits), only once was the hospital able to secure admission to an inpatient psychiatric unit which sent him back to detention after two weeks of ineffective treatment,” Trager said.

Her son was eventually moved to the Department of Juvenile Justice where they realized he needed treatment and not incarceration. Due to her son meeting his time limit at the DJJ, he was discharged even though he was not deemed safe to return home.

With no Illinois State Police-approved facilities available for help, Trager said they had to find a residential placement out-of-state but had to go through due process in court to send him to an out-of-state facility.

The six state agencies are to work through a step-by-step process that examines and reviews if children and their families have access to behavioral health services in their community, schools or through residential programs.

Agencies will review the allocation of resources to meet needs within existing programs, eligibility requirements for different levels of care, barriers to interagency coordination and the best practices from other child-serving systems across the country.

Rich Bobby said the non-profit Little City facility at which he is senior chief program officer serves children and adults who are impacted by autism, intellectual, and other mental and behavioral health challenges.

Bobby noted that problems regarding the state’s behavioral health response date back more than a decade, but the pandemic has made it “incomprehensible to a point where families are just at their wits’ end.”

Data from the Centers for Disease Control and Prevention found that children’s mental-health related emergency visits increased from March to October 2020. In Illinois, more than 100,000 students with disabilities receive social, psychological or counseling services.

In the proposed budget for Fiscal Year 2023, DHS would receive $50 million from federal funds for programs that address trauma, mental and behavioral health.

DHS and the other five state agencies would partner with community-based organizations to establish and support the new federal 988 crisis line and response services for individuals experiencing a mental health crisis.

The budget also includes $150 million to fully implement the Pathways to Success Program for children with serious mental illnesses.

Pathways to Success is a program through DHS for Medicaid-enrolled children under the age of 21 who have behavioral and mental health needs. The program provides access to an evidence-based model of intensive care coordination and home and community-based services.

“Our children are our greatest treasure and not one of them should fall through the cracks because of an antiquated system that is too small and too slow to fit the scope of their needs,” Pritzker said.