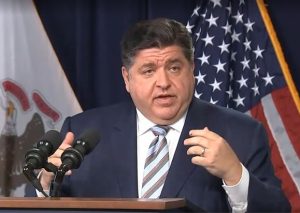 SPRINGFIELD – An amendment to the Health Care Right of Conscience Act that allows an employer to fire a worker for noncompliance with COVID-19 vaccine or test requirements surfaced Monday, Oct. 27, ahead of the final three scheduled days of legislative action this year.

That bill language was introduced in the General Assembly Monday as Gov. J.B. Pritzker announced a new partial vaccine agreement with the state’s largest public employee union and held a news conference to encourage vaccination in children aged 5-11, provided federal regulators recommend the vaccine in that age group next week.

The current HCRC Act defines conscience as “a sincerely held set of moral convictions arising from belief in and relation to God.” On those lines, certain care, including testing, can be refused without repercussions from an employer.

Some have used those lines to not only refuse vaccine mandates, but also the testing requirements that are in place for people covered under the mandates if they choose not to receive the vaccine.

The new amendment provides that it is not a violation of the Act “for any person or public official, or for any public or private association, agency, corporation, entity, institution, or employer, to take any measures or impose any requirements … intended to prevent contraction or transmission of COVID-19.”

Per the bill, employers can terminate employment or exclude individuals from a school, place of employment or public or private premises in response to noncompliance.

Gabel and Pritzker’s office did not immediately reply to a request for comment Monday.

But when asked about potential changes to the act last week, Pritzker spokesperson Emily Bittner said, “The Healthcare Right of Conscience Act was never intended to allow people to avoid public health guidance and jeopardize workplace safety during a global pandemic. The administration supports efforts to clarify the law, so it cannot be misinterpreted by fringe elements.”

Pritzker has mandated that certain groups of state workers, K-12 school employees, higher education students and personnel, health care workers and others either receive the COVID-19 vaccine or submit to weekly testing. Last week, he added day care personnel to the list.

The state and part of its largest public employee union – American Federation of State, County and Municipal Employees Council 31, or AFSCME – announced the latest agreement, which covers about 7,800 employees of congregate facilities at the Department of Human Services and Department of Veterans’ Affairs.

“Our most vulnerable residents, such as veterans who can’t live on their own and adults living with developmental disabilities, have no choice but to live among workers at these facilities,” Pritzker said at a news conference Monday. “These residents have also borne some of the worst consequences of this pandemic, which has preyed, first and foremost, upon the elderly, congregate spaces and those with pre-existing conditions. They deserve the safest possible homes that we can provide, and that includes the protection of a vaccinated community.”

They join the Teamsters, VR-704 union, the Illinois Nurses Association, the Illinois Federation of Public Employees and Illinois Trade Unions as those covered in agreements with the state. All must be fully vaccinated as of Nov. 30 with the first dose received by Tuesday.

The latest agreement does not cover all of AFSCME’s workers that are otherwise covered under the mandates, as negotiations between the state and the Department of Corrections and Department of Juvenile Justice have reached an impasse. The state and the union will submit to arbitration regarding the 10,300 security employees in those agencies.

For an additional 1,900 non-security employees at those two departments, the governor’s office said the state plans to impose the same requirements as the rest of the unions.

The governor’s Monday news conference also focused on the state’s effort to prepare for the approval of the Pfizer-BioNTech COVID-19 vaccine for children aged 5-11. The U.S. Centers for Disease Control and Prevention advisory committee is scheduled to meet Nov. 2 and 3 to consider approval.

Illinois Department of Public Health Director Dr. Ngozi Ezike said the department has begun planning events for the following week. There are 1.1 million Illinoisans in the age 5-11 range that will become eligible for vaccination should the CDC approve it.

“I firmly believe when we begin to vaccinate our younger residents of this state, the numbers will continue to drop for the cases and the hospitalizations statewide,” she said. “We use car seats and safety restraints in vehicles. We protect our kids from cigarette smoke and secondhand smoke. We monitor the toys that they play with, and we vaccinate against vaccine preventable diseases that literally save lives. Today, I’m asking you to add COVID to that list of vaccines.”

The governor’s office said more than 2,200 providers statewide are already enrolled to provide the vaccine to children, and the state expects to receive 306,000 doses, with another 73,000 going to the city of Chicago and 100,000 doses to pharmacies.