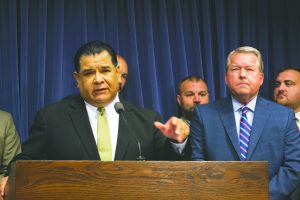 State Sen. Martin Sandoval (D-Chicago) speaks in favor of an infrastructure plan to raise $2.4 billion for roads and bridges by increasing the state’s motor fuel tax and licensing fees during a news conference May 8 at the Capitol in Springfield. On Oct. 2, Gov. J.B. Pritzker called on Sandoval to step down as chairman of the Transportation Committee in the wake of an FBI investigation into possible corruption and bribery involving public contracts. (File photo by Jerry Nowicki/Capitol News Illinois)

SPRINGFIELD ­— Democratic Gov. J.B. Pritzker Oct. 2 called on Sen. Martin Sandoval (D-Chicago) to step down as chairman of the powerful Senate Transportation Committee in the wake of an FBI investigation into possible corruption and bribery involving public contracts.

“While Senator Sandoval is under investigation, it’s in the best interests of our state that he no longer serve as chairman of the Transportation Committee,” Pritzker told reporters shortly after an unrelated event in Oak Lawn. “If he doesn’t step aside, he should be removed.”

A spokesman for Senate President John Cullerton, however, said the Senate president was not yet ready to make any moves.

“This remains an active investigation, and the Senate president wants to make informed decisions,” spokesman John Patterson said in an email statement.

Those comments came a day after Cullerton’s office, responding to open records requests, released heavily-redacted copies of the search warrant that was issued Monday, Sept. 23, for Sandoval’s Statehouse office.

That warrant was executed the following day when federal agents were seen carrying out computers, boxes and brown paper bags marked “EVIDENCE.”

Although the names of specific individuals and companies were blacked out, the documents indicate agents were looking for information and communication related to several businesses, at least two lobbyists, one or more municipalities, five Illinois Department of Transportation officials and items “related to any official action taken in exchange for a benefit.”

Sandoval, a Democrat, was instrumental in pushing through a $45 billion capital infrastructure bill this year that will fund repairs and improvements to state highways, bridges, university campuses and other public facilities.

Among the businesses and individuals mentioned in the search warrant were, “any business owned or controlled by Martin Sandoval…”

Items seized during the raid included several computers, cellphones, USB drives, “Friends of Martin Sandoval” spreadsheets and a file labeled “IDOT” containing letters and other documents from an individual whose name was blacked out.

The only outside business listed in Sandoval’s most recent statement of economic interests, filed May 1, 2018, is Puentes Inc. According to published reports, that company provides English-Spanish translation services. The 2018 disclosure statement indicates the company worked on contract for the town of Cicero and the North Berwyn Park District.

Sandoval has not been charged with wrongdoing. He has not issued any statements regarding the searches.

The search of Sandoval’s offices and home were just the latest in a series of raids the FBI has carried out in recent months that point to a wide-ranging federal corruption probe targeting Chicago-area Democrats.

In January, Chicago City Alderman Ed Burke was indicted on 14 counts of corruption for allegedly soliciting legal business for his law firm in exchange for allowing certain development projects to go through.

And in early August, federal prosecutors indicted state Sen. Tom Cullerton, a Villa Park Democrat, on embezzlement charges of allegedly receiving a salary and benefits from a labor union for which he did little or no work. A status hearing for Cullerton is scheduled for Oct. 29.