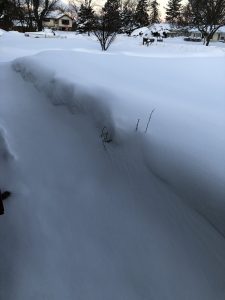 “I have directed my administration to use all resources at our disposal to keep our communities safe amid dangerous and ongoing winter weather,” Pritzker said in the news release. “I urge all Illinoisans to take this extreme weather seriously, avoid all unnecessary travel and check in on your neighbors.”

Chicago and the surrounding suburbs were hit especially hard, with some areas receiving as much as 12 inches of snow in the past 24 hours, on top of several inches of existing snowfall.

Northern regions of the state have faced significant snow accumulation, as persistent freezing temperatures have kept snow from melting.

Current forecasts indicate that portions of northern and west central Illinois will continue to experience subzero temperatures in the coming days.

Central and southern Illinois, including the Metro East region near St. Louis, were hit with between four and eight inches of snow in the past 24 hours, along with single-digit temperatures, according to the National Weather Service.

Pritzker said in the release that his administration is communicating with local governments “to ensure they have the support they need in disaster response and recovery operations.”

He also cautioned residents that freezing temperatures have resulted in frozen wells in key natural gas producing states, such as Texas, Oklahoma and Kansas. This has caused an increase in demand for natural gas with a decrease in supply, leading to a spike in the price of natural gas, according to the release. 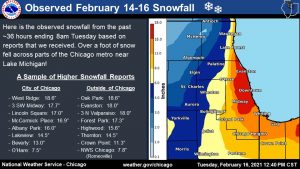 To address this, his administration is working with “federal partners to pursue federal assistance to help communities recover and to do what we can to protect ratepayers from soaring utility bills,” according to the release.

“Proper home heating is a critical issue during the winter months, and over time has proven deadly for many families,” Tate-Nadeau said in the release. “If using an alternative heating source during this extreme weather, take a moment to ensure that your carbon monoxide detector is working properly. The proper safety precautions can save lives during extreme weather.”
The Illinois Emergency Management Agency urged residents to follow tips to conserve energy that include insulating walls and attics; weatherizing doors and windows; hanging blankets over windows at night but letting the sunshine in during the day; and covering cracks around doors with rugs or similar materials.

Additional tips for conserving energy at home and staying safe in the winter storm are available online at the Winter Weather Preparedness Guide, which was developed by IEMA and the National Weather Service.