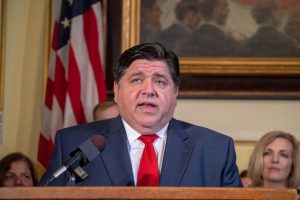 Gov. J.B. Pritzke said on Dec. 16 said he would sign a letter of consent to allow refugees to resettle in Illinois. The letter is required by the Trump administration. (Photo by Jerry Nowicki/Capitol News Illinois)

SPRINGFIELD — Democratic Gov. J.B. Pritzker says he fully supports allowing refugees to resettle in Illinois and he is expected to sign a letter to the Trump administration to that effect in the coming days.

“As the great grandson of a Jewish refugee from Ukraine, the president’s attacks on immigrant families are deeply personal to me,” Pritzker said Dec. 16 in an email statement. “I will always embrace refugees with open arms, and under my administration Illinois will always be a welcoming state that values the contributions immigrants make in our society.”

Pritzker’s comments came after the humanitarian aid organization World Relief and 77 Illinois pastors who are part of the Evangelical Immigration Table sent letters to Pritzker and 14 other governors urging them to support refugee resettlement, even as the Trump administration sharply curtails the number of refugees allowed into the country.

The executive order states it is the administration’s policy to consult with state and local governments, “to identify the best environments for refugees, but also to be respectful of those communities that may not be able to accommodate refugee resettlement.”

“State and local governments are best positioned to know the resources and capacities they may or may not have available to devote to sustainable resettlement, which maximizes the likelihood refugees placed in the area will become self-sufficient and free from long-term dependence on public assistance,” the order states. “Some states and localities, however, have viewed existing consultation as insufficient, and there is a need for closer coordination and a more clearly defined role for state and local governments in the refugee resettlement process. My administration seeks to enhance these consultations.”

Jenney Yang, vice president of advocacy and policy at World Relief, said during a phone interview that the United States is poised to allow only 18,000 refugee resettlements in the current federal fiscal year, the lowest number in the nation’s history.

“The U.S. has traditionally been the world’s leader when it comes to resettling the largest number of refugees, and it’s a role that the United States has played for many years,” Yang said. “… And when the United States closes doors, it actually leads to other countries closing their doors as well.”

According to a tally kept by World Relief, 24 other governors and more than 60 municipalities have already submitted consent letters. Among the local communities listed is DuPage County. In addition, the U.S. Conference of Mayors sent a letter Nov. 25 to Secretary of State Mike Pompeo urging the administration to rescind the executive order.

“It’s not just the Chicagoland area, in which most people think refugees are going,” she said “It’s places like Aurora and DuPage and Moline, which is where Global Relief has offices. But it’s important for people to understand that there’s a variety of communities and Illinois that have supported refugee resettlement for over a decade.”