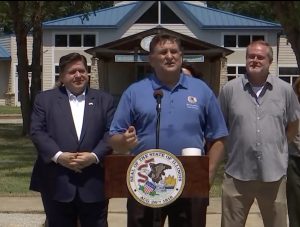 State Rep. Dan Severin speaks at an Aug. 3 news conference with Gov. J.B. Pritzker and Sesser Mayor Jason Ashmore regarding the funding for the sewer and renovations project at Rend Lake Beach in southwestern Illinois. (Illinois.gov)

SPRINGFIELD – When state lawmakers voted on bipartisan lines in 2019 to double Illinois’ motor fuel tax and raise several driving-related fees, it laid the groundwork for a $45 billion infrastructure plan, the largest in Illinois’ history and the first in nearly a decade.

The fruits of that spending can be seen statewide in the program’s fourth year, which includes $350 million for projects on interstates 24 and 57 in Southern Illinois, and $100 million for railroad, bridge and other transportation projects in the Springfield area among several others.

“It’s why I proposed and signed the historic, largest-ever in the history of Illinois, bipartisan Rebuild Illinois capital plan — so that we could deliver the repairs that our residents needed on a fast-tracked timeline,” Gov. J.B. Pritzker said Wednesday, Aug. 3 in one of two news conferences highlighting recent or upcoming expenditures. “And we are seeing the effects of that legislation in real time.”

The Rebuild Illinois plan also included a “vertical infrastructure” component for state buildings such as crime labs, schools and colleges, as well as other non-transportation infrastructure. Those portions of the bill are funded through a gambling expansion and a $1-per-pack cigarette tax increase, both of which were also approved in 2019.

The original Rebuild Illinois spending plan passed on even broader margins, 95-18 in the House and 53-6 in the Senate.

One lawmaker voting against all three of the bills was then-state Rep. Darren Bailey of Xenia, who was later voted to the state Senate and is now the Republican nominee for governor against Pritzker, the plan’s biggest champion. 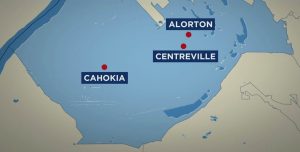 The city of Cahokia Heights formed in 2021 from a merger of three cities. As part of the Rebuild Illinois program, the city will receive $21 million for infrastructure improvements.

Bailey has frequently criticized the 2019 gas tax increase, which was indexed to inflation. He’s attacked not only Pritzker, but also state Rep. Avery Bourne, of Morrisonville, the running mate of his main primary rival who voted for the infrastructure plan in 2019.

Pritzker, meanwhile, has made a near-weekly commitment to publicizing the state’s infrastructure spending since the bill’s passage in his first year as governor.

On Au. 3 that included stops in Cahokia Heights in the Metro East and Whittington in Southern Illinois to publicize funding for sewer improvements and renovations at the Rend Lake Beach Resort.

Projects in Cahokia Heights, the newest city in Illinois which incorporated in 2021, will receive $21 million, including $9.9 million to revamp its sewer system – correcting a problem that residents said has existed in the area for more than 50 years.

State Sen. Christopher Belt, D-Swansea, said at a news conference he was raised in Centreville, which is now part of Cahokia Heights.

“When the weather forecasts growing up said rain or thunderstorms in Centreville, Allerton, Cahokia, what is now Cahokia Heights – that meant something totally different,” he added. “Anxiety set in and you’re like ‘oh my God,’ you know, you start boxing things, precious things to you, because you didn’t want to lose them.”

The $9.9 million would be immediately released by the state, Pritzker said, focusing on, among other things, repair or replacement of 35 lift stations and several thousand feet of pipeline repair.

Cahokia Heights Mayor Curtis McCall Sr. said at the news conference “there has never been this type of money” available from the state to fix chronic problems in the area.

“I’m 60 years old, all of my life I’ve been dealing with this,” he said. “Once we have this $10 million that the governor brought down today, we would probably say, according to the engineers, three to five years before this project is completely done. But I can tell you that our residents will start seeing tremendous progress as early as two months.”

At another news conference in Franklin County later in the day, Pritzker announced $17.5 million from Rebuild Illinois will go toward the renovation of the Rend Lake Resort at the 3,300-acre Wayne Fitzgerrell State Recreation Area, which is operated by the Illinois Department of Natural Resources.

It had been closed since December 2016 after IDNR found mold and other maintenance issues on the property.

The resort site features a hotel, conference center, cabins, restaurant, boatel, gift shop, pool, tennis courts and more, most of which will be renovated under the state construction plan, once again enabling the resort to host guests, conferences and other events.

State Rep. Dave Severin, R-Benton, voted for all three components of the capital plan in 2019. He said the announcement marked one of his two best days in the past six years, the other being when he was elected to the House in 2016.

“The potential is amazing, what it’s going to bring back to Southern Illinois as far as jobs,” he said of the resort. “Of course, people who have jobs, what are they doing? They’re paying taxes. With those taxes we’re able to help with the things here in Southern Illinois.”

“The river resort is an important part of the regional economic engine and the return of the resort will continue to offer more opportunities to the over 2 million visitors to the Red Lake area each year and capitalize on more tourism dollars,” he said.